Visit to the Fabulous Crocodiles of the World 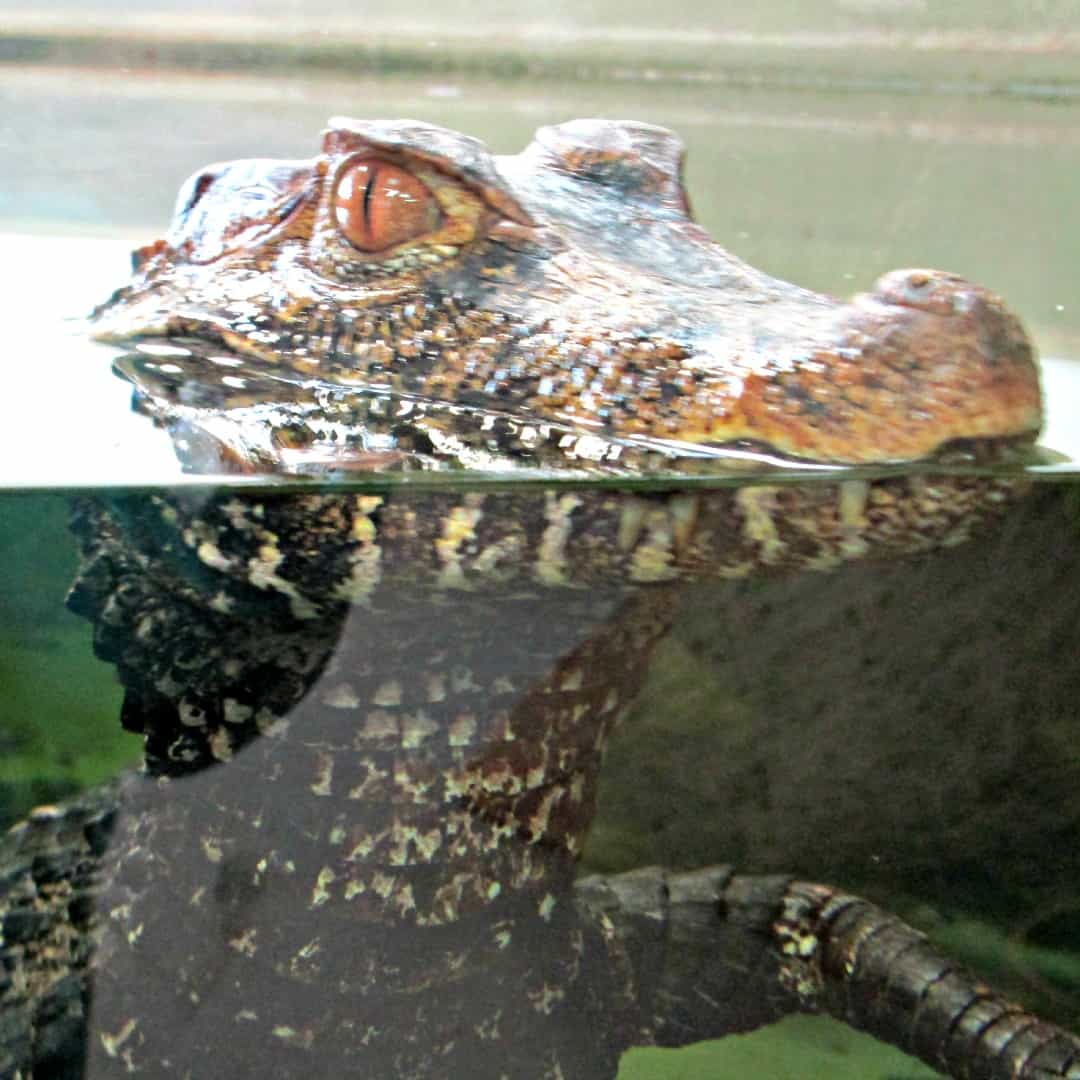 Yesterday, the kids and I had the most amazing afternoon out at Crocodiles of the World, in Oxfordshire. This Crocodile Conservation and Education Centre is the UK’s only Crocodile Zoo, and states as it’s mission “To inspire in our visitors a respect and understanding for the crocodile. The aim is to stimulate public awareness about crocodiles, alligators, caimans and gharials, and open people’s eyes to the incredible nature of crocodiles, and spark curiosity and awareness for the future.”

They are definitely achieving what they set out to do, the place is amazing! I only heard about its existence from a friend recently; I believe they opened on this site early 2014, and a lot of care and thought has clearly gone into the planning and building of the zoo, both for the benefit of the animals who live there, and the visitors. 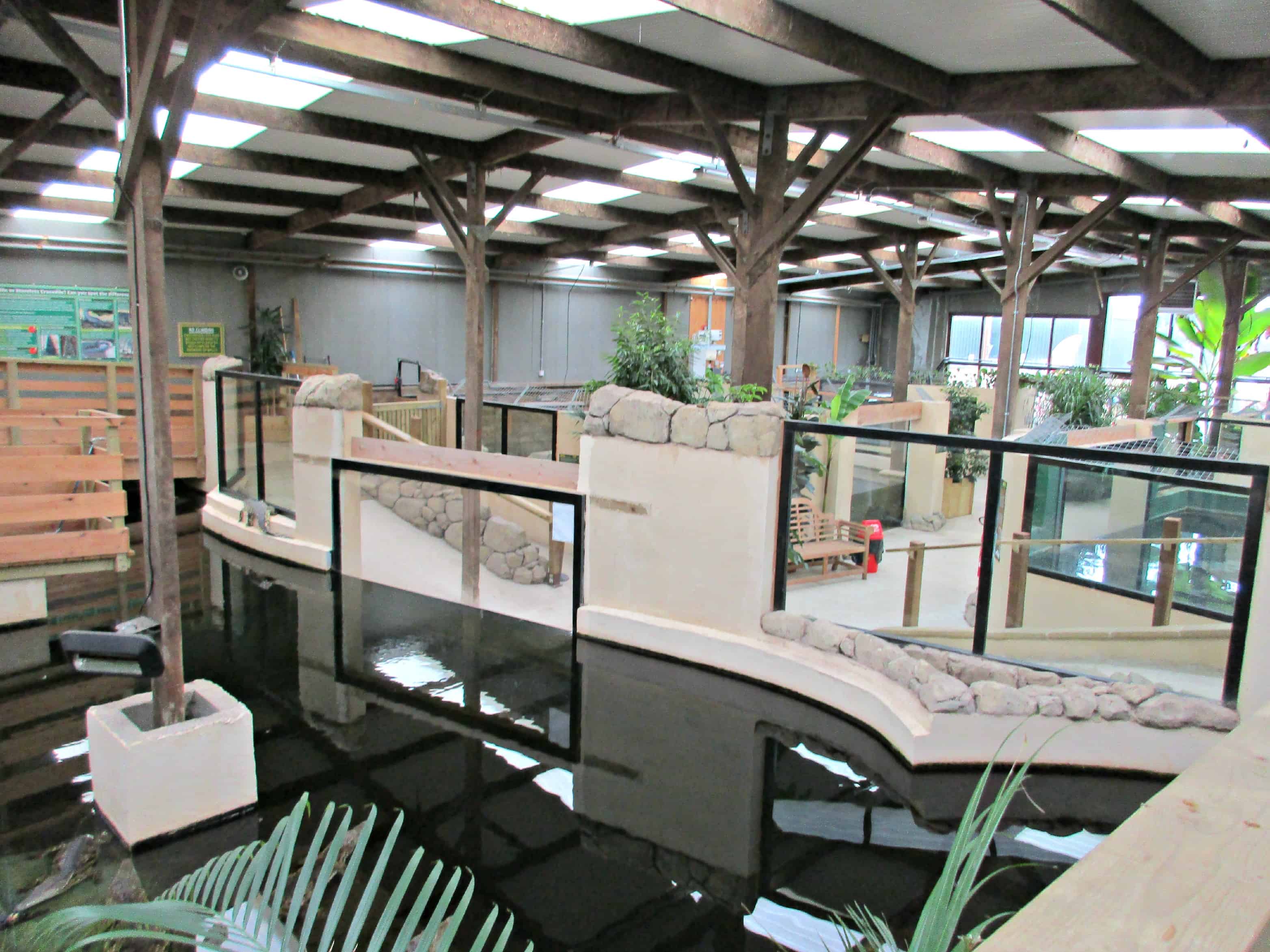 Crocodiles of the World is home to 14 species of the crocodile family, with over 100 of these animals on site. The animals are housed in habitats with glass sides, which allows the visitors to view the animals underwater, as well as on the surface. Neither the kids, nor myself, have seen crocodiles before close up (not surprisingly), they are truly majestic. There is clearly a huge focus on conservation underpinning the zoo, many of the species exhibited are critically endangered, threatened in the wild by loss of habitat, hunting, the exotic pet trade and persecution, and Crocodiles of the World are part of an international co-operative breeding programme for some of these species. 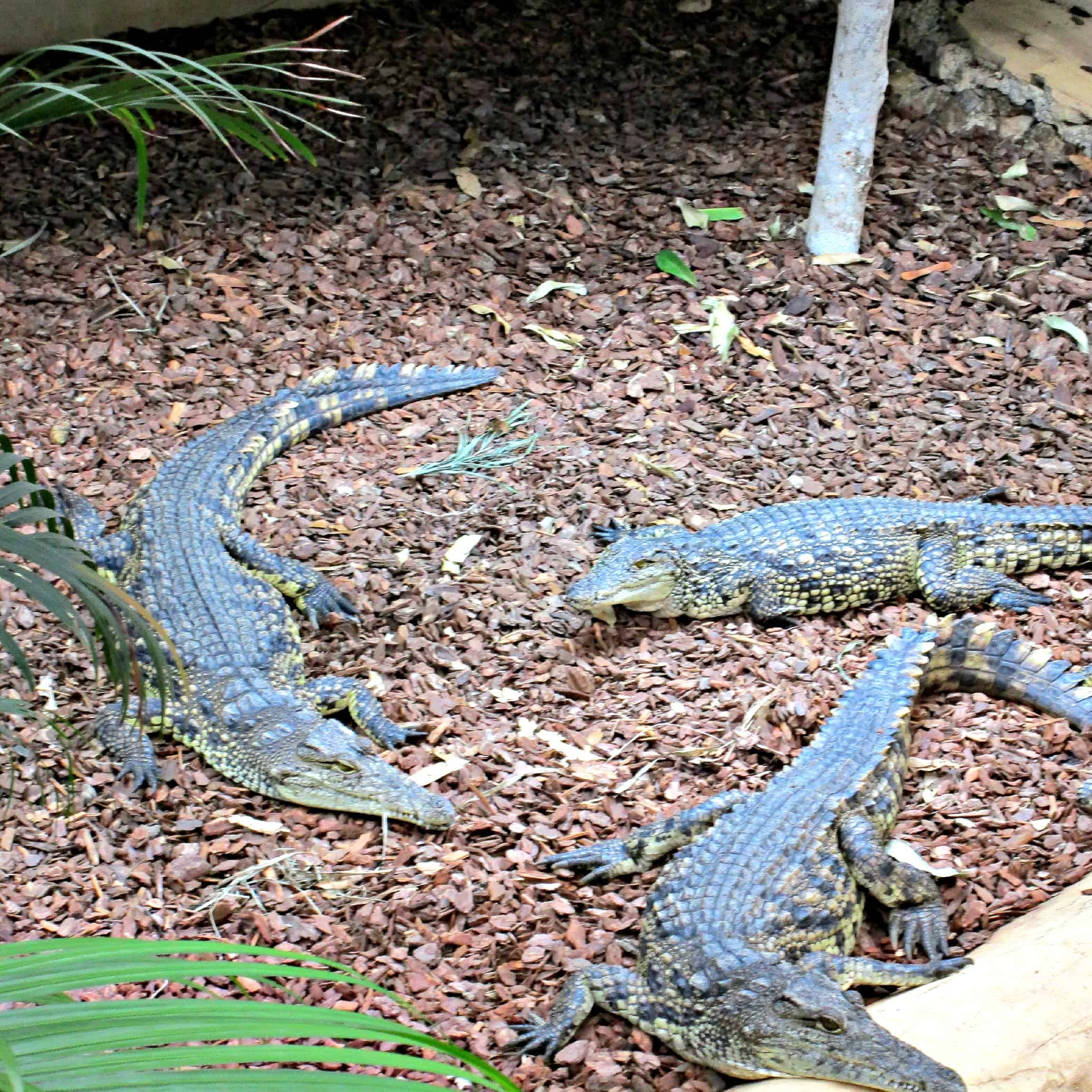 Throughout the day, talks and feeding of the animals takes place at regular intervals. The photo in the middle, below, shows Hugo who is an adult male Siamese Crocodile (which are critically endangered, possibly with less than 1000 mature individuals living wild). He was difficult to photograph, as he moves incredibly quickly when catching his food, but you get the idea from this one of how impressive he is. He lives with his mate Rebecca, and the adorable babies that the kids are holding are their year old offspring. (taken from the hatching room, not their enclosure!) 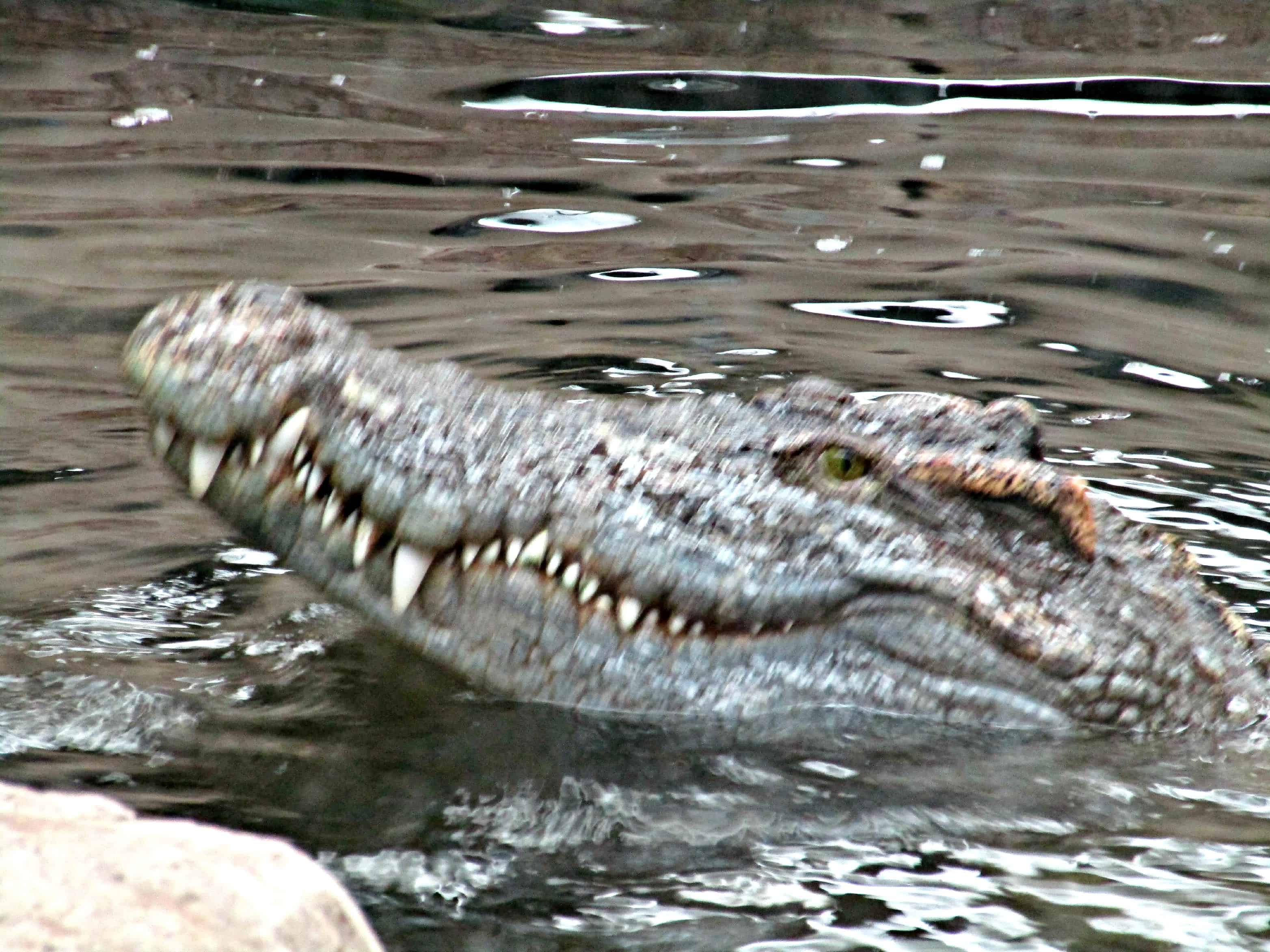 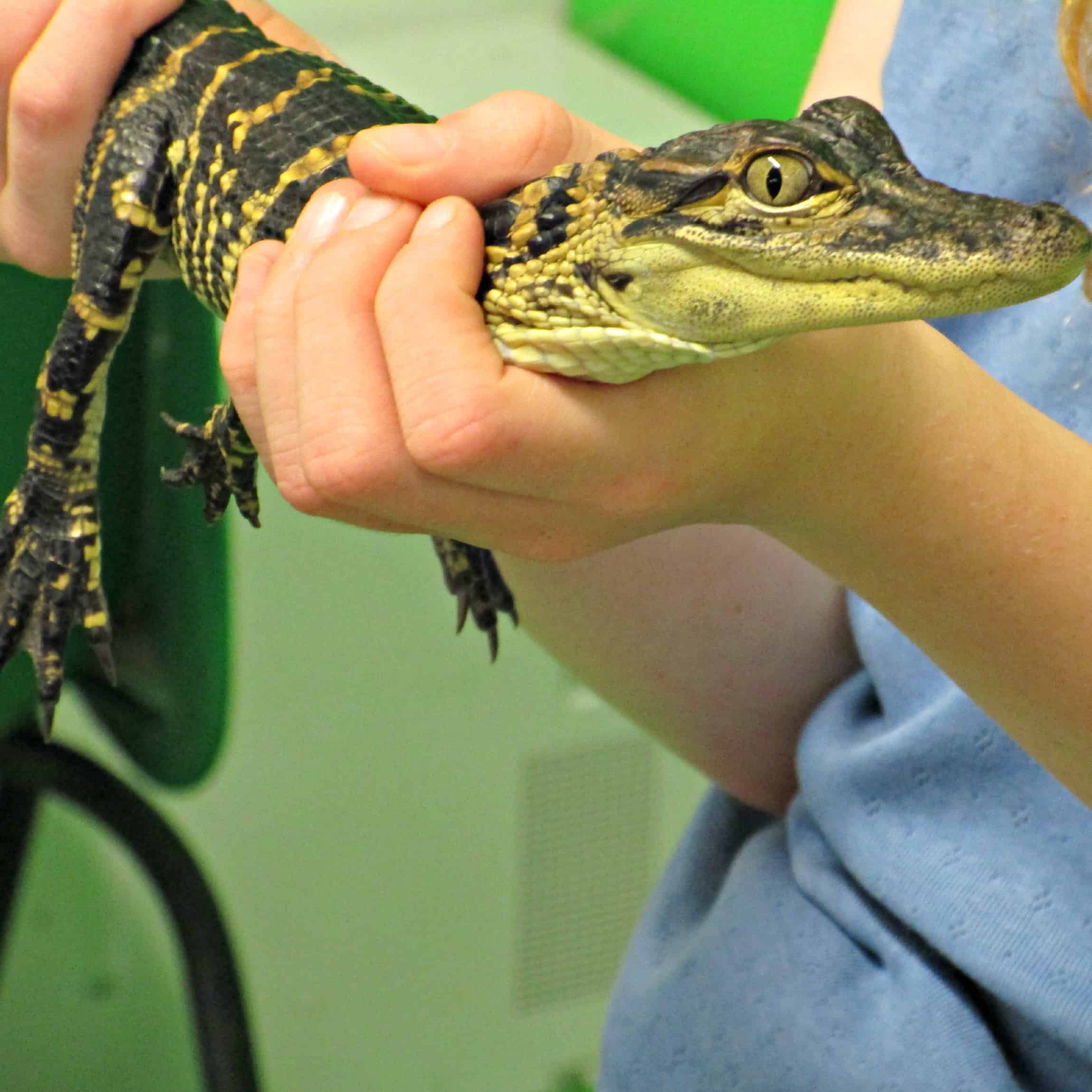 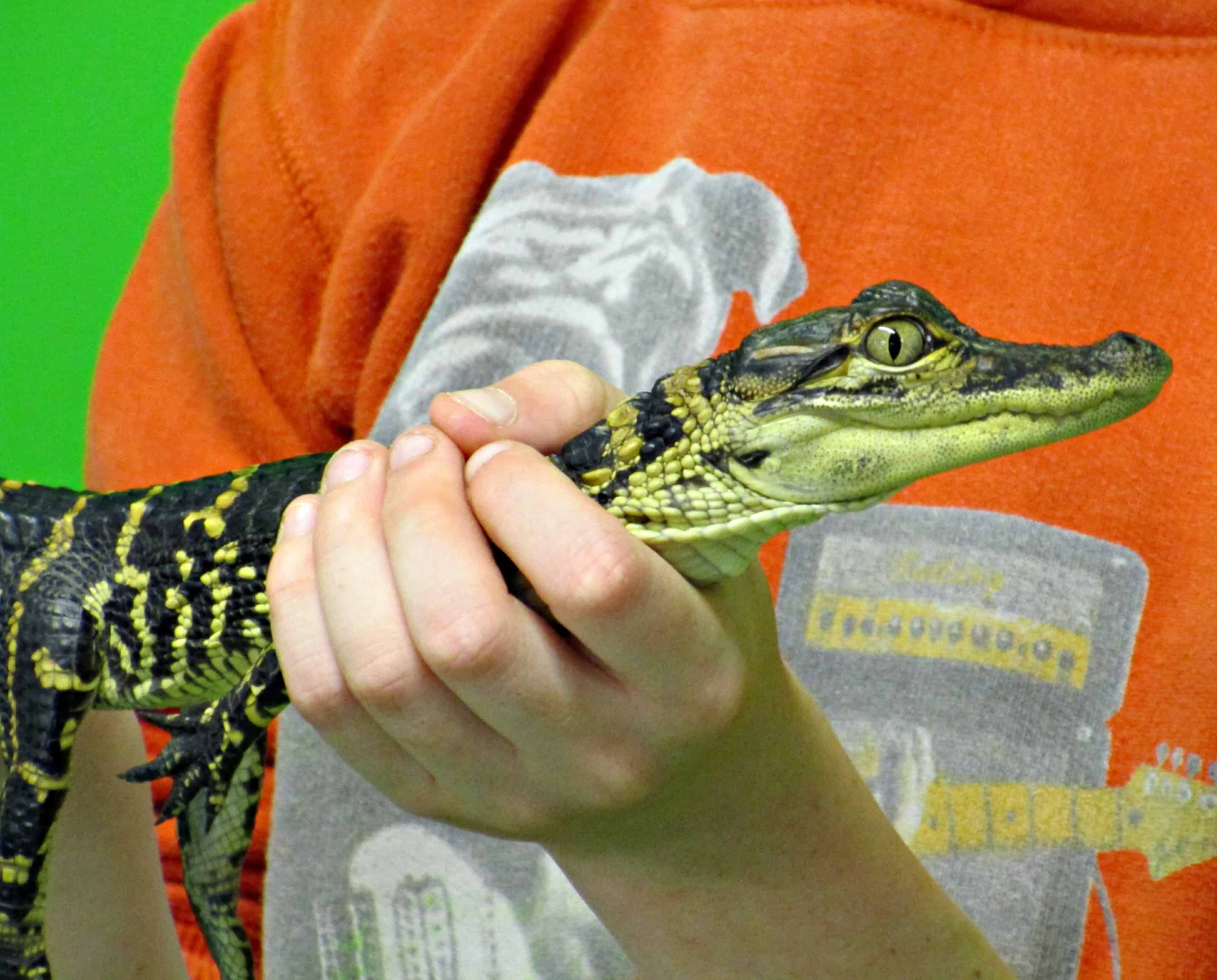 As well as the crocodiles and related species, the zoo is also home to a number of other reptiles such as monitor lizards, snakes and turtles,and a selection of Birds, Otters and Meerkats. 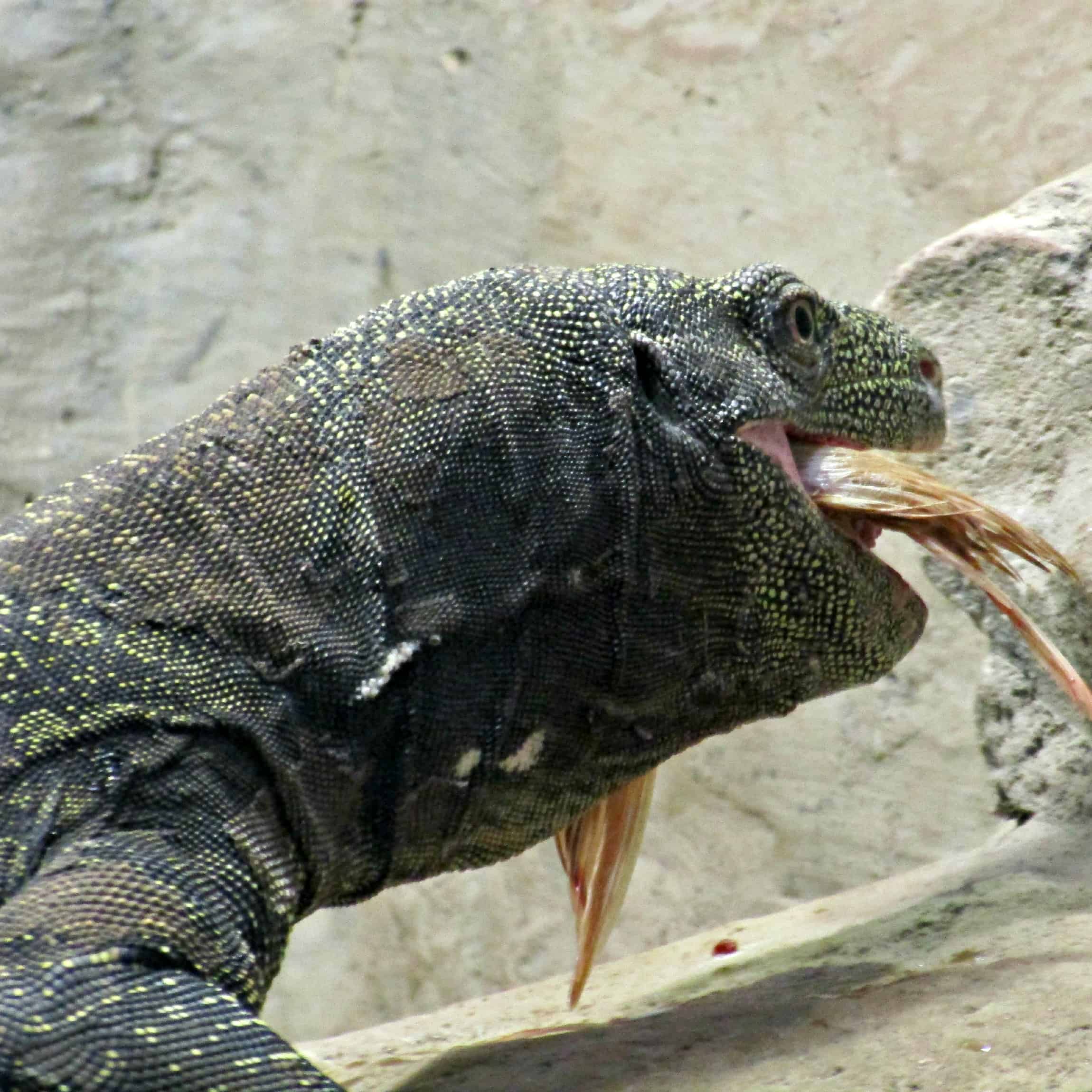 The keepers on site all clearly love their jobs. All the talks and demonstrations were fascinating, and they were all really happy to chat about the animals they care for. We saw Crocodiles, Monitor Lizards, Indian Long-Eared Owls and Otters fed when we visited, as well as getting to hold the baby crocodiles. 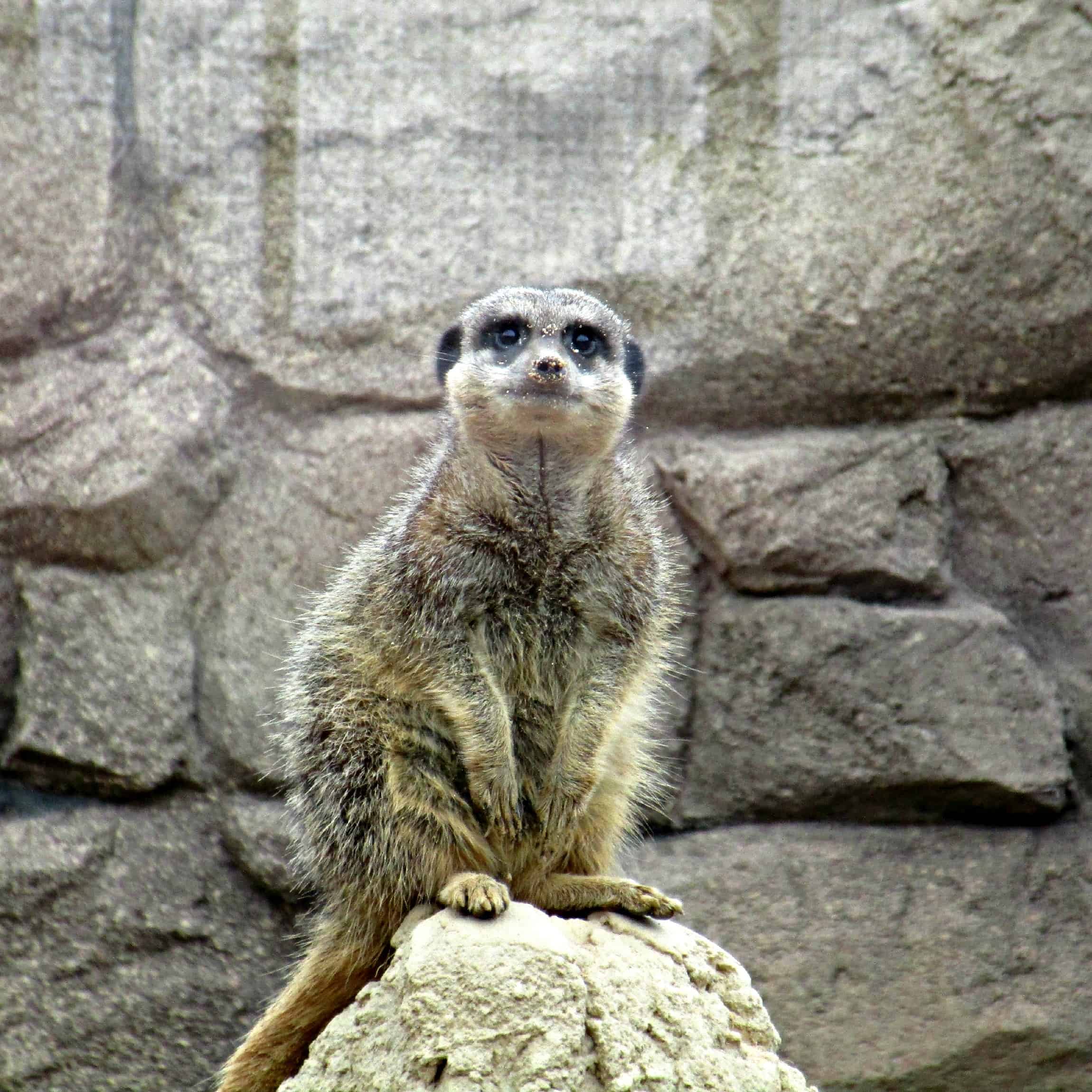 We loved the whole feel of the place, particularly the signs…

We had a brilliant afternoon out, the kids were so enthused by the experience, and as you can see from the photos the animals are amazing. The Zoo runs a number of keeper experiences and shorter hands on sessions, and both kids are talking about doing that when we next visit.  My son fancies a ‘walking with monitor lizards’ session, and my daughter, of course, wants to do one of the ones that involves the Meerkats.

If you are looking for other fun family days out, check out our 12 fabulous places to visit in and around the Cotswolds post. 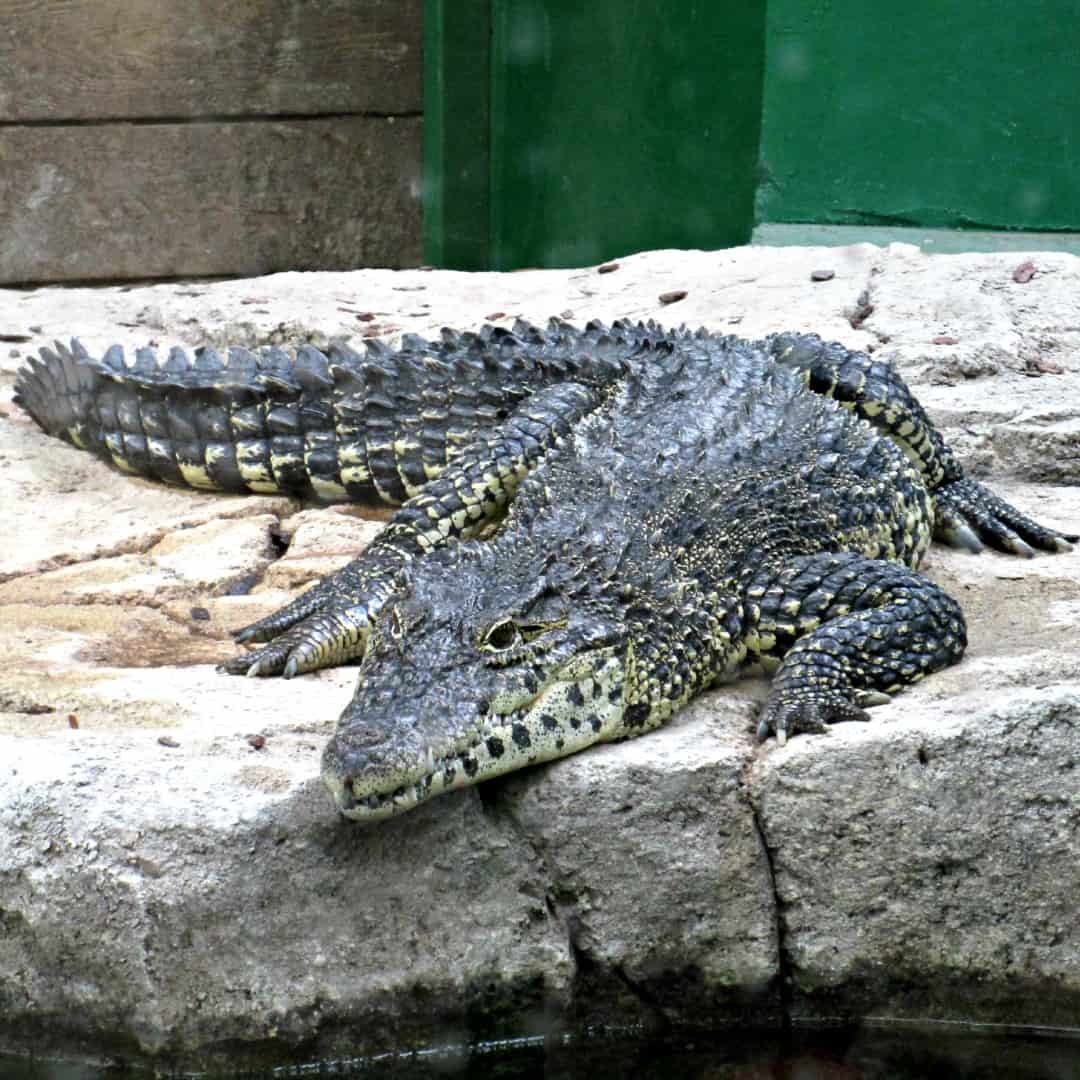 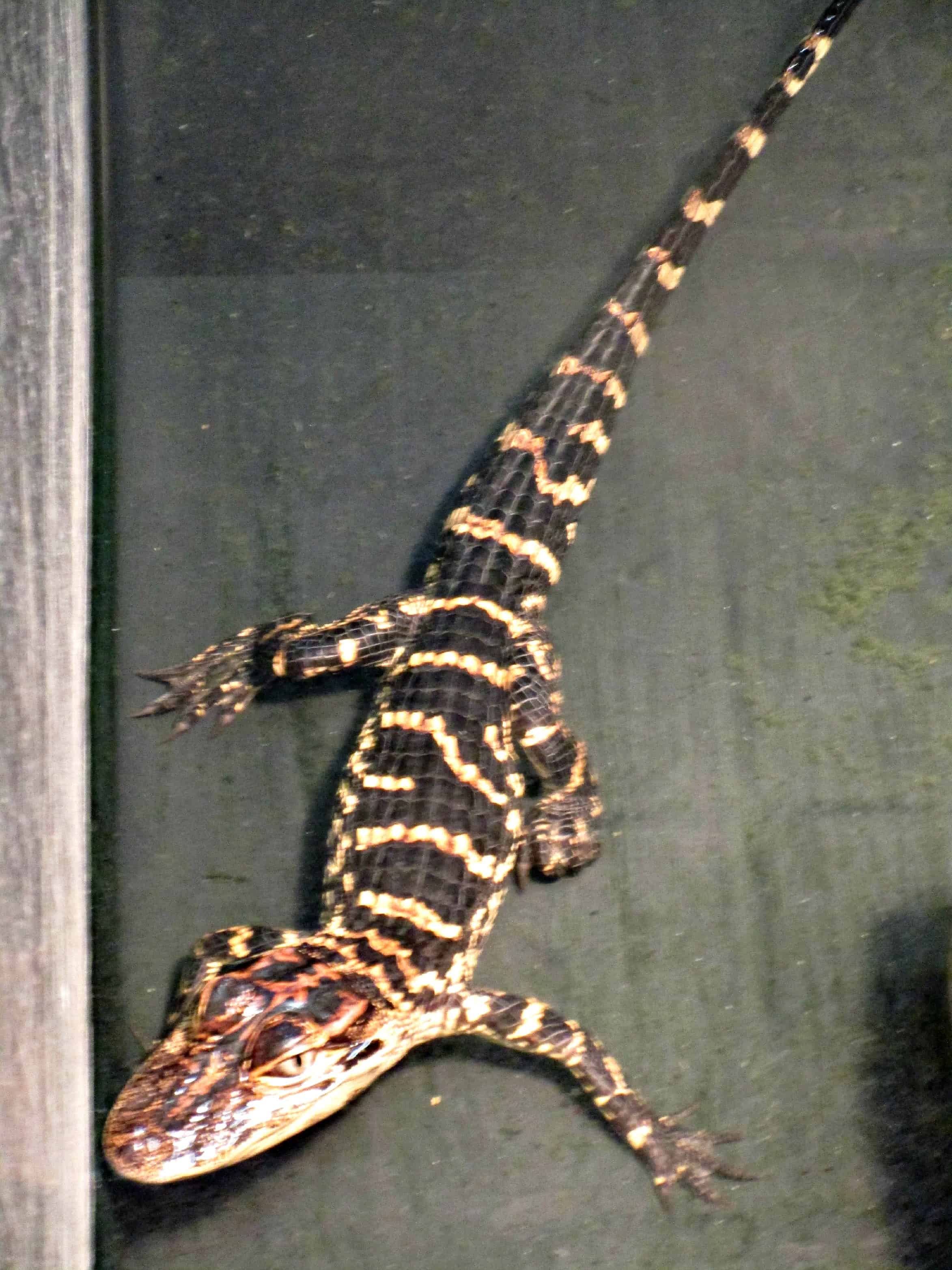 How to Grow Beautiful Paperwhite Narcissus for Christmas

Wow! I did not know UK has this kind of place. I know there is a gigantic crocodile farm in Thailand but not in the UK. It is very interesting and it would differently be something that my little Ethan would like to visit. Looks like you had a great time and it is also good to know that there are other animals in their conservations too. Thank you for sharing. I have pinned this. Hope that is okay with you. 🙂

They are such fascinating creatures. One man started it, and the website says it was his dream for a long time. So we are lucky that people like him exist 🙂 Thanks for pinning, it’s a great place to share x

This place looks awesome, and I have a little boy who would love to go there.

My kids absolutely loved it, they cant wait to go again

wow place looks amazing.Sadly a bit too far away from us, love the span of sizes from the ones you can handle to the ones big enough to eat you. The signs made me laugh.

Isn’t it amazing that something so cute can grow into something so predatory! The signs are brilliant, and for once my kids actually did what they were told lol 🙂

What a great place to visit. Crocodiles are amazing creatures and fascinating to study like this. When I was in Australia I got very close to them in the wild, it was quite scary, but a fantastic experience. I might have to look into taking my kids here.
Thanks for sharing #LetKidsBeKids

Must be amazing to see them in the wild, they are pretty intimidating! I really would recommend a visit, we’ll definitely be going back 🙂

My son would LOVE this!!! Too bad we live in the US and not the UK….we will have to visit someday for sure.

It really is a fab place to visit, you’ll have to plan a UK holiday 🙂

Looks like a fab place to visit. I always find crocodiles a bit mysterious to watch, they’re often so still. The signs are great too. #Letkidsbekids

Some were as still as statues, and that was really quite eerie. We learned so much there, so we do now have a new found respect for them. Thanks for visiting and taking the time to visit 🙂

Wow this looks so cool. I’d be a tad frightened but it sounds really interesting. I love the signs and those babies are actually pretty cute. That’s amazing that they let you hold them! I’d be terrified but I guess they’re used to being handled. It’s good that the keepers are enthusiastic. I love it when you go to places and they genuinly seem to love their jobs because the way that they talk is different and always makes you feel more engaged and interested. I’d love to visit here and see a real life crocodile up close. I’m glad there are big barriers though haha.Thank you so, so much for linking this to #whatevertheweather. xx

They were amazing to see. They stay quite still and just watch you, which is a bit eerie. The babies were super-cute, although we were advised to keep our fingers away from their mouths! We are thinking about going back and doing one of their animal encounters were you can get really involved with the animals 🙂 Thanks for having us on #WhatevertheWeather

I’ve passed the signs to this place a few times now and have been intrigued. It’s lovely to read your review – definitely makes me want to go and check it out with the girls! Those signs are brilliant!!!

It’s definitely worth checking out – we were really impressed with the place. The signs really made me laugh 🙂 We only went for the afternoon but they have different activities and talks throughout the day,all of which looked great. Let me know what you think if you do go!

My friend and I drove past signs for this a couple of weeks ago on a trip to Minster Lovell and it made us chuckle. Now I know what it is all about! One to take my son to one day.

Bet he’d love it – my kids thought it was fab, and have talked about it ever since. My son is trying to get his teachers to take them there on a school trip now!

What an educational looking zoo. Crocodiles have so much history to them, I wish they could communicate with us and tell us of the world so long ago! I’ve never seen so many reptiles in one place, just as well they are safely behind glass though, those teeth are quite fearsome! A wonderful experience to see them all so close, thank you for sharing with me on Country Kids.

I think Crocodiles were around even before the Dinosaurs! You are right they are incredible, and pretty intimidating. They come across as being highly intelligent as well. We saw some adults being fed – that was quite an experience. Lovely to link up with #CountryKids again x

I looove the signs, animals first!! It looks like an amazing place to visit and to learn more about the world’s wildlife, in particularly crocodiles who tend to get a bad reputation. They really are amazing creatures and fantastic that the kids could hold the babies. I would love to visit one day!
Thanks for linking up to #Whatevertheweather 🙂 x

Aren’t the signs great? Think its the first time my kids have actually adhered to ‘please don’t climb signs’ too – they were unusually compliant lol! I cant recommend a visit highly enough, I’ve told everyone I know about it 🙂

Oh WOW, what an awesome, awesome place! I wish there was something like this near us. Amazing! Visiting you from Whatever the Weather!

It really is! We were all absolutely blown away by it, the kids have talked about nothing else since 🙂 Thanks for visiting us and taking the time to comment x

We went to Crocs of the World shortly after it moved to the new site. Although we enjoyed it it looks from your photos that they’ve got a wider range of animals now. Quite a lot of the outside was still being set up when we went. Still the same ethos though – the strong conservation focus really came across during our visit too. #whatevertheweather

I know they said that the education centre area was brand new this year, so they clearly have worked hard there. With loved it so much that we’re thinking of going back again over half-term 🙂 Thanks for visiting and taking the time to comment x