DIY Wormery: How To Make A Worm Compost Bin

In this post, we explain what a wormery is, the benefits of owning one, and how to easily DIY a worm compost bin for just a few pounds. 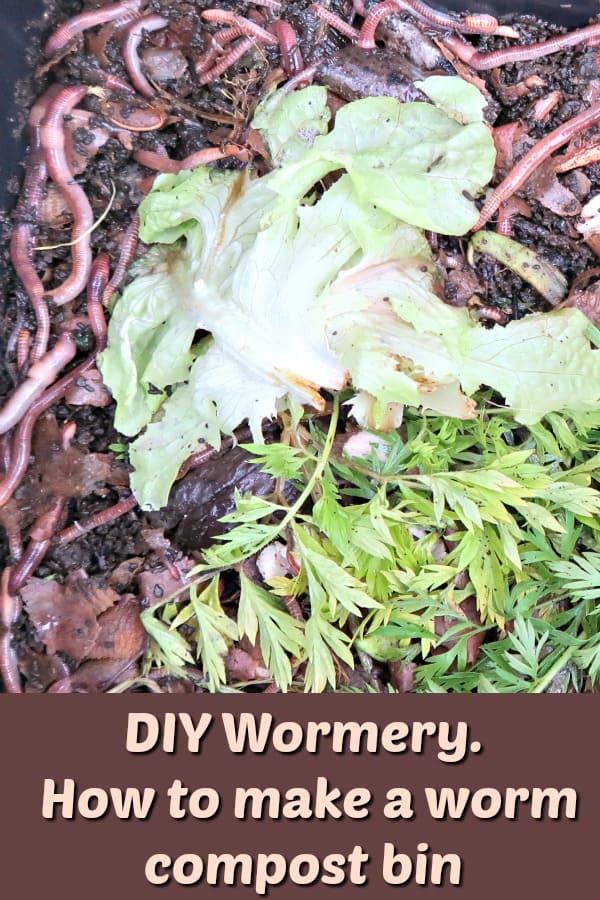 Putting food scraps on a compost heap doesn’t work for us. They attract rats, foxes and our own very greedy dog. I’ve fancied trying a worm composting system for ages, but the price of shop-bought wormeries has always put me off.

We grow all our vegetables in raised beds and love them. You can read about all the benefits of using them in our post 20 advantages of growing veg in raised beds. You do, however, need to replace the nutrients the plants use to avoid them becoming depleted over time. We’ve tried a couple of methods to add goodness back into the soil this year. The first was our liquid compost made from weeds; the second was making our very own wormery.

What is a Wormery?

A wormery or worm bin is a simple composting solution that recycles kitchen waste into nutritious compost using worms.

It consists of a simple container that houses a colony of composting worms. The worms live and breed in the wormery, feeding on organic matter that you add to the bin. Providing their very basic needs are met, the worms will thrive in their habitat, and produce nutrient-rich compost.

Wormeries don’t take up much space, shouldn’t smell and make compost faster than traditional compost heaps, making them perfect for any outdoor space. They are also a great way to get a close-up view of nature at work. Best of all they turn waste back into something useful that benefits your immediate environment, rather than it ending up in the landfill.

How a Wormery Works.

A wormery can be made in one of two ways.

The first is made up of at least two compartments and is the method I have shared below in my DIY wormery instructions.
The bottom compartment (the sump) collects any liquid produced, known as worm tea, which is drained off via a tap to use as liquid feed for your plants.

The top compartments are where the worms live and where you’ll put your kitchen scraps to feed them. It is also where the compost is produced. When the top box becomes full, it is either emptied, and the worms returned to start the cycle again, or alternatively, a third level is added on top.

The top boxes have holes drilled in their bases, allowing any liquid produced by the worms to percolate down into the sump. Once a compartment is full, the holes also enable worms to migrate up into a new level, so that compost from the vacated box can then be harvested.

The second method does away with the bottom compartment and tap, encouraging excess moisture to evaporate by increasing the ventilation holes in the body of the wormery. The theory behind this method is that the resulting compost will be even richer as no nutrients have leached out in the ‘worm tea’.

If this method is chosen, it is essential to ensure there are plenty of drainage holes in the base of the bottom box to avoid the worm bin becoming waterlogged and drowning your precious worms.

In both designs, a lid keeps everything from drying out or becoming flooded by rain showers.

What you need to build a DIY Wormery.

I opted to build my wormery with a sump and tap at its base. This is what I used.

Note about worms: The tiger worms that are suitable for worm compost bins are different from the common earthworm you find in your garden. We ordered ours online, and all of them appeared perfectly happy when they arrived in the post. We opted to buy 500 grams of them to start our diy wormery.

How to build a DIY Wormery

I started with the bottom box, which will be the sump.

Carefully cut out or drill a hole to fit the thread of the water butt tap snugly. Position it as low as possible to minimise the amount of liquid left in the bottom when you drain the worm tea off. Screw the tap tightly into position then secure with the back nut. My tap sealed perfectly using the washer that came with it without having to use any sealant. Raising the wormery on blocks will make it easier to access the tap and drain off the liquid into a container.

Set this box to one side.

Drill quarter-inch holes in the base of each of the top boxes, approximately 2 inches apart. Then drill a single row of holes near the top of each side of the boxes.

Using a piece of wood underneath the panel you are drilling will avoid any mishaps and give you something to push against.

These holes will help to improve airflow, creating a healthier environment for your worms. Handily my brother turned up as I was making my worm compost bin, so he did mine for me.

Pick a location to site the wormery. It should be kept in a shady, sheltered position where it is easily accessible.

Sit the sump box on a couple of blocks and check you can access the tap.

Place a couple of bricks inside it to support the second box above any liquid that collects.

Line your second box with a piece of damp cardboard.

And cover with a couple of inches of worm bedding. I used compost from our garden, but you can also buy coir as bedding. The bedding should be slightly damp, so if it is dry moisten with a little rainwater.

Introduce your worms then cover with a layer of shredded newspaper and cardboard. We also added a couple of whole toilet rolls as the kids thought the worms might want to play in them! Don’t introduce a load of food at this stage, its recommended that you leave your worms to settle in for a few days before you start feeding them.

Finally cover the bedding, paper and cardboard layer with another damp covering. We used an old folded pillowcase, but sacking or cardboard works just as well.

Pop on the lid and leave to settle for a few days.

Note: So far I have only used 2 of the boxes. I will add the third box once the box with the worms and scraps of food is full so they can move up to a new level. You add the box by removing the damp cover (pillowcase) and sit the box on top of any food scraps and the compost. Start adding your food scraps to the new box, covering them with the pillowcase. Once the worms move into the third box you can empty out the middle box and use the compost.

A common mistake with a new wormery is overfeeding. It is important not to do this as excessive food will start to rot and raise the temperature of the environment, putting your worms at risk.

When feeding your worms always start with the rule ‘little and often’, and chop up the scraps/food into smaller pieces. As time goes on, and your worm population increases, you can increase the quantities of what you add.

What can I feed my worms?

Highly acidic fruit such as citrus fruits and onions should be avoided. Also avoid meat and bones, products covered in fat, vinegar, garlic and spicy foods, eggs (eggshells are excellent) and dairy products.

Our worms have settled in beautifully in our diy wormery, and appear to be multiplying rapidly. It’s great to be able to recycle our food waste, and I can’t wait until we harvest our first bin of compost.

How to Easily Bleach Pine Cones at Home

How To Make Batik Art Using A Glue Stick

do you take them inside in the winter or get new worms every spring? It’s too cold in a lot of Canada for them to survive outside.

Hi PennyMarie Although the worms generate some heat to keep themselves warm they would need to be put in a garage or similar if you live in a cold climate to prevent them freezing. Hope that helps :)

I love the idea of making our own wormery. I had one years ago which I eventually gave to a neighbour due to the fly problems it caused. Any tips on keeping flies at bay?

I haven’t had any problems with flies. I haven’t been adding any cooked food though as I have more than enough raw and I have been careful not to over feed them so I haven’t had any noticeable odour either – maybe that helps?