Uley Long Barrow, also known locally as Hetty Pegler’s Tump, is a Neolithic burial mound, near the village of Uley, Gloucestershire. It is thought to be at least 5,000 years old, and is one of a number of Cotswold-Severn Long Barrows that are under the care of English Heritage. It is a scheduled National Monument, and having undergone repairs and further archaeological examination in 2011, is free to anyone who wishes to visit. 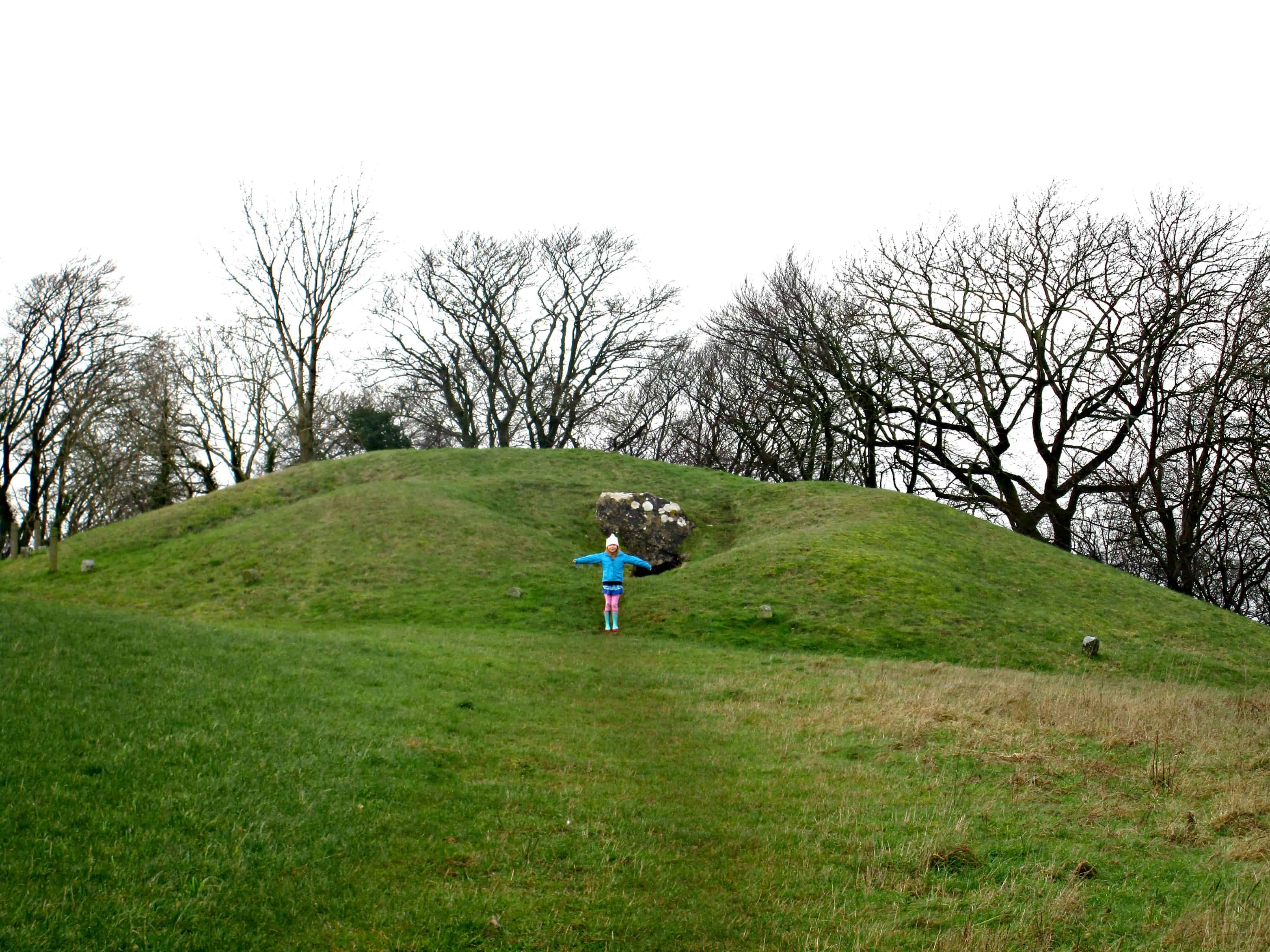 The first recorded archaeological excavation of the site was in 1821, when workmen discovered it while digging for stone to use in road building. At that time it is recorded that the remains of 15 skeletons, plus the jaw bones of wild boar and neolithic pottery were found within the tomb, while a single skeleton, believed to be a later intrusive Roman burial, was discovered just below the surface of the mound. In 1854, further excavations revealed more human remains within the structure including nine human skulls as well as animal teeth and boar tusks. Throughout the rest of the 19th Century the barrow underwent various episodes of repair and reconstruction which shaped what we see here today. 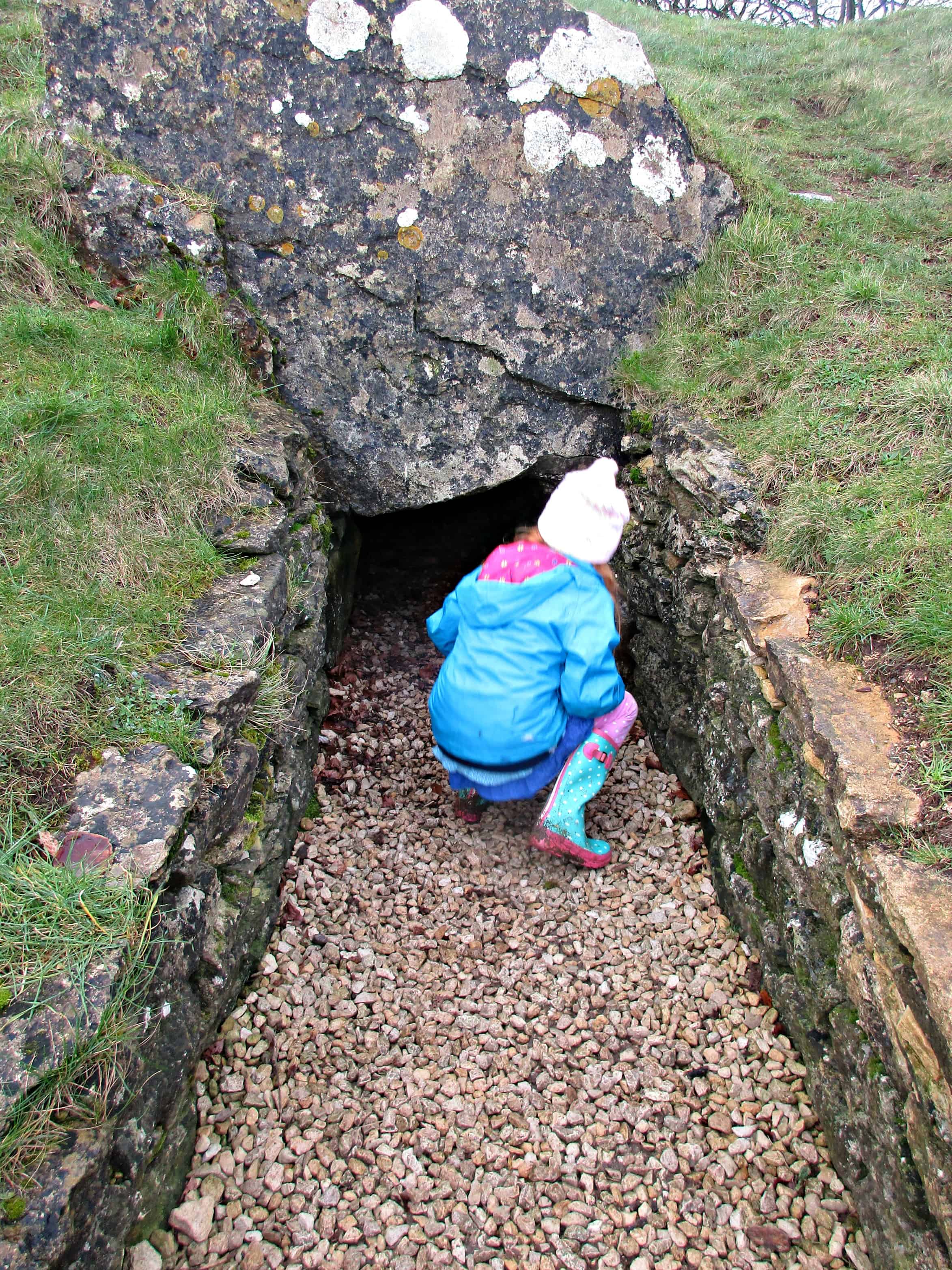 We decided to visit as my daughter is currently studying early man at school. The site has open access, and is situated in a farmer’s field. The mound looks impressive as you approach it, and we were hugely excited when we spotted the entrance – although we knew we’d be able to go into it, seeing the tiny opening on the side of the great mound was still an adventure, if you do decide to visit you really must take a torch! 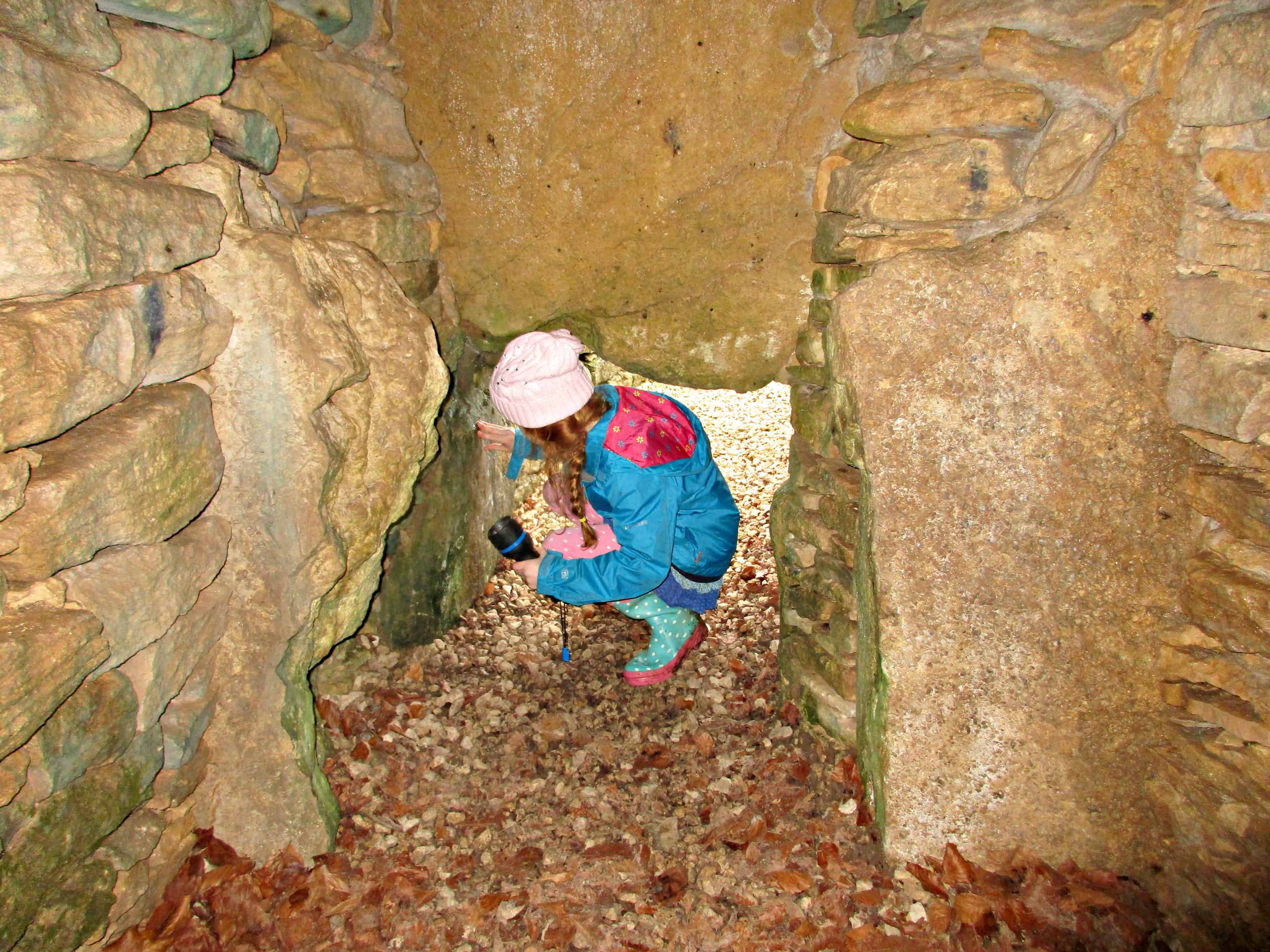 As you can see from our photos, entering the tump is not an elegant process, so I’d advise wearing jeans and making sure the person with the camera is not behind you! 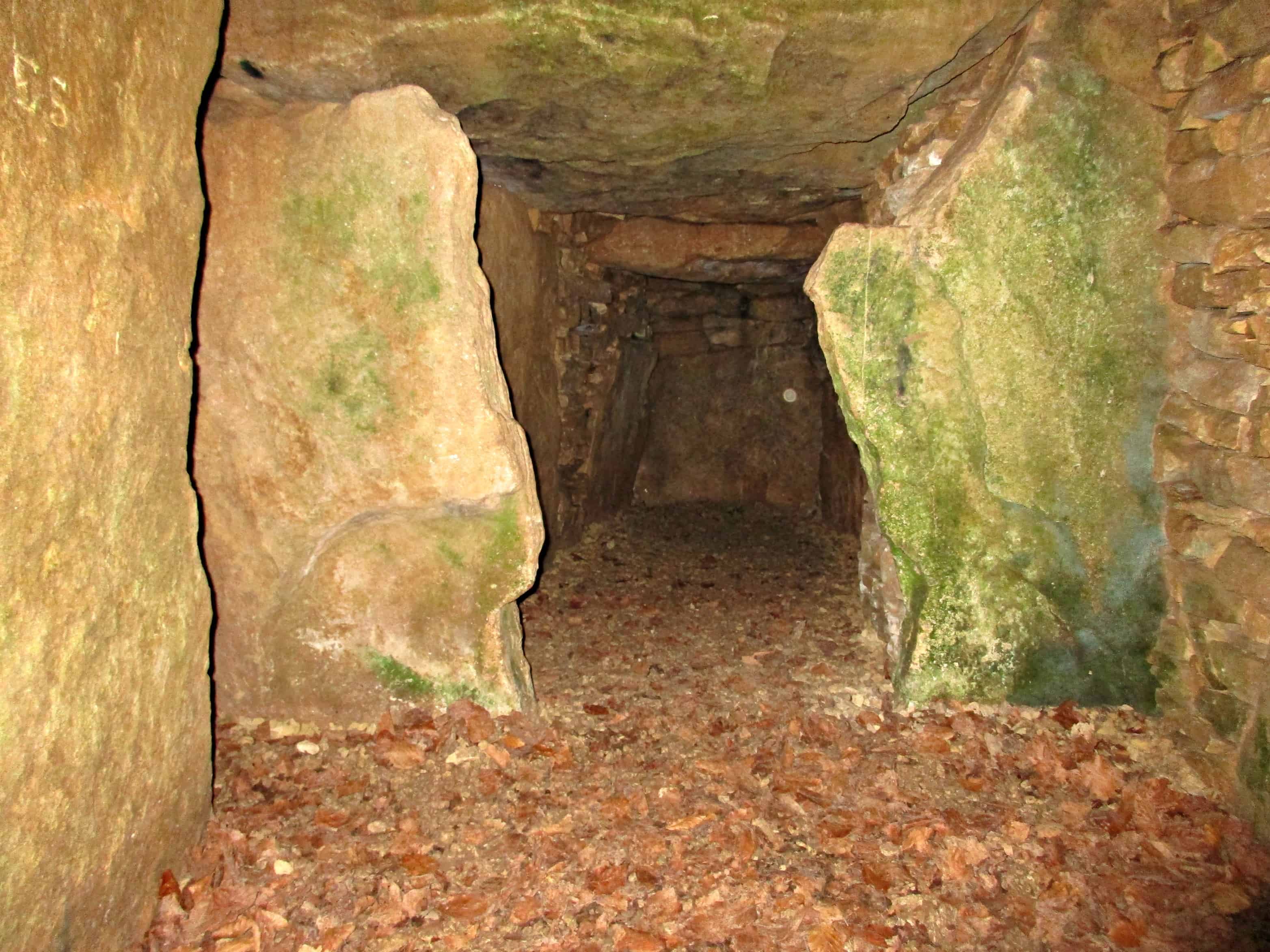 Originally there would have been two pairs of chambers (one pair on each side) and an end chamber off the gallery you enter into. The pair on the right of the entrance are blocked off, but the others are accessible. Where it looks as though there is a crack on the left hand side is one of the chambers, with the other just behind the standing stone.

My daughter was able to stand up inside, this is one of the side chambers. Not surprisingly, the Barrow feels very atmospheric. It was a pretty cold, miserable day when we visited, but inside felt very calm, still and quiet.  Although we knew that it had been built as a tomb, it didn’t feel an unpleasant place to be. We tried hard to imagine what a task it must have been to build such a structure, knowing what we know about how people lived back then, and how important this place must have been to them. 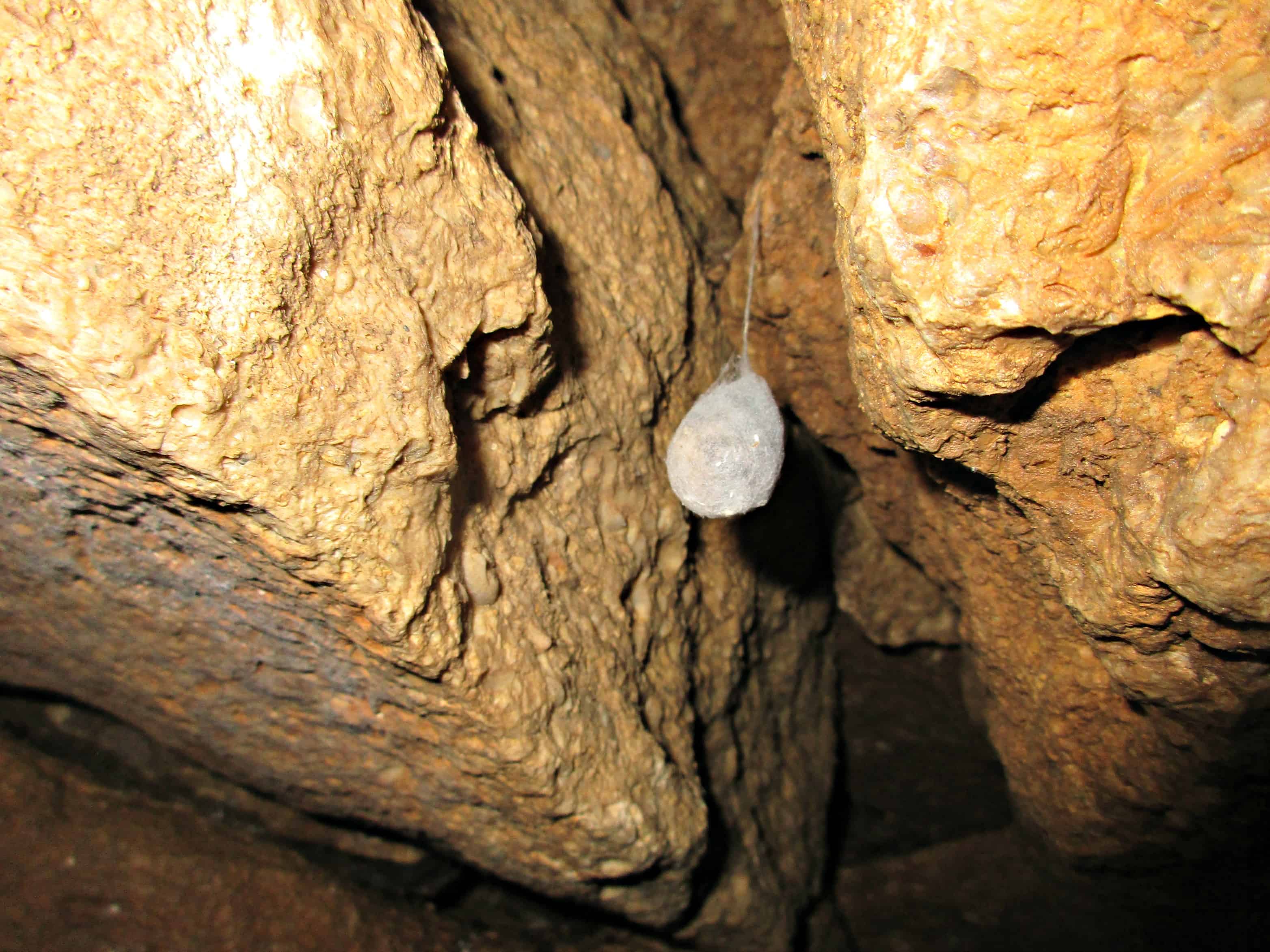 We then noticed a number of these sacs hanging from the roof. My guess is that they are spider nests, but if anyone knows for sure we’d love to know. 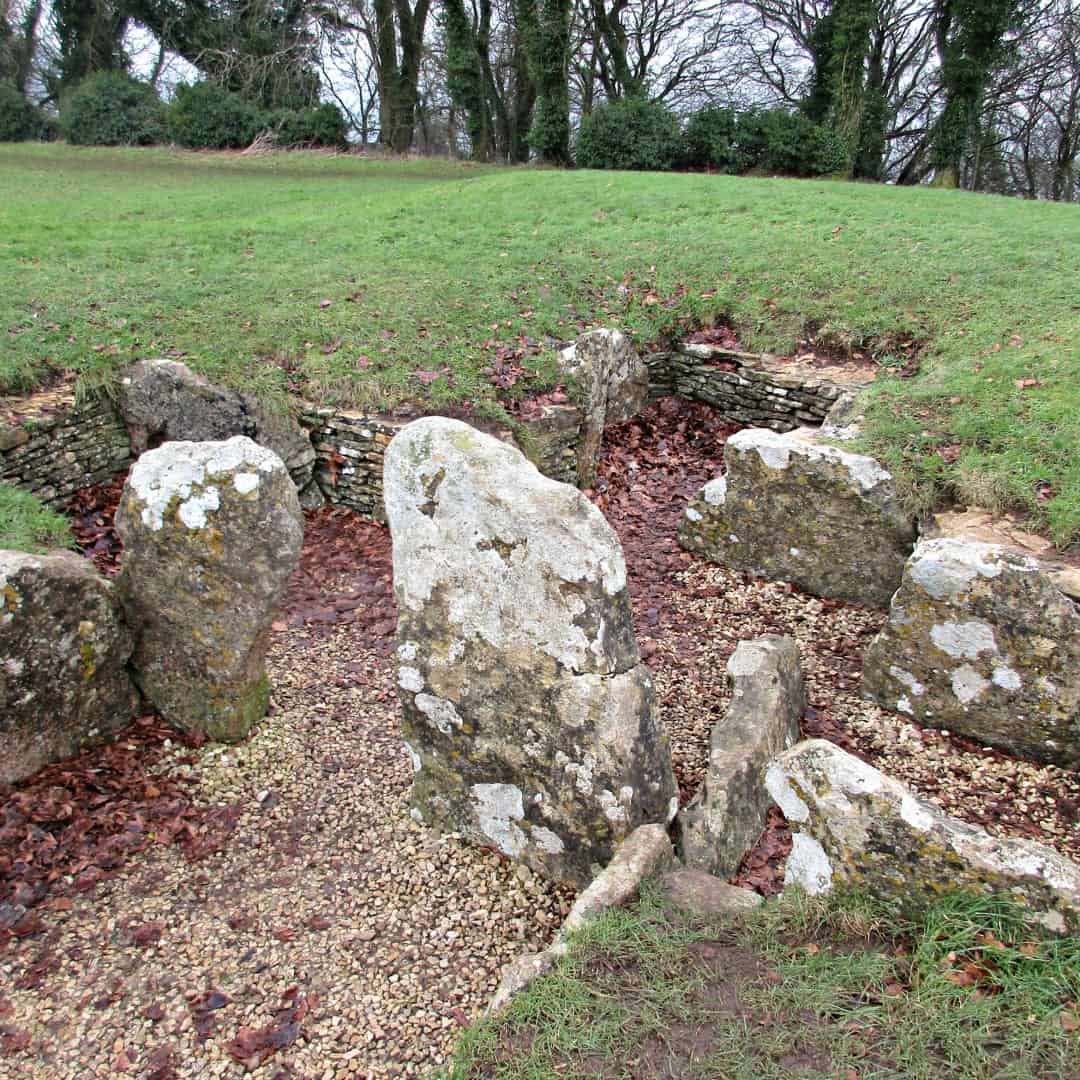 We also went and had a look at Nympsfield Long Barrow, which is less than a mile away. As you can see from our photo this one is exposed, which means that although it doesn’t have the magic of Hetty’s Tump, it does give you the opportunity to see it’s shape really well. You can also see the view from here, that originally both barrows would have looked over – and even on a miserable day it’s pretty breath-taking!

The South West has an abundance of ancient historical sites that you can visit for free. Check out our visits to  Avebury, Barbury Castle and Cirencester Roman Amphitheatre for more inspiration.

How to Make a Tree Bark Rubbing

How To Make The Best Homemade Vanilla Extract

Lots of black bodied medium sized spiders from the roof. Not sure on the species

Oh thank you Chris, I thought they must be spider nests 🙂

This is VERY cool. I love historical finds and I think finding places like this is amazing for kids to explore too! Thanks so much for linking up with #MMWBH

It’s great isn’t it, and I love the fact its just sitting in a field and there’s open access to it. Thanks for having us x

What a fantastic free adventure! I wonder if we’ve anything similar near us … I’ll have to go look. Thank you 🙂

It really was an adventure, venturing in by ourselves – we felt quite brave! I believe there’s quite a lot scattered around the country so hopefully you’ll find one near you 🙂

Wow! It looks fantastic and free as well! I like comparing the two, they do look very similar, just that you can see the shore better in the more exposed version. It would be a great experience to visit on a solstice or another pagan event and go inside the tump, I imagine it would feel quite spooky and mystical at the same time! I love old archaeology like this, so intriguing to find out why they built it and how.
Thanks so much for linking up to #Whatevertheweather 🙂 x

It does seem amazing that you can just go and visit with no-one else around. I’d love to go back on my own and spend a little time there to really soak up the atmosphere – although my daughter loved it you never really get a chance to contemplate quietly with kids around!

Wow this is so interesting!!! That must have been quite a find for them to discover all of those skeletons. It’s good that there is a nice atmosphere inside, you’d expect it to feel quite chilling. The views are spectacular! What a stunning place to explore! Although I would have been out of their at first sight of those spider sacks! Thank you for sharing your adventure with #whatevertheweather xx

It must be amazing to find a tomb with the skeletons intact! I thought it’d feel more creepy than it did in there. I think it has a lot to do with being built from Cotswold stone – it’s such a beautiful, warm coloured stone, and so familiar to us around here. Spiders don’t bother me, but my daughter wasn’t too keen on them once I told her what I thought they were!

This is so interesting. It really makes history come alive for everyone! I love going on excursions like these! Thanks for sharing with #abitofeverything

It is fascinating to visit places, rather than just reading about them in books. Thanks for having us x

Looks like you had a fun day exploring and what an interesting place to visit. If I’m honest it would probably creep me out a bit!!xx #whatevertheweather

It was a bit creepy climbing in. First thing I did was have a good look around with the torch to make sure there wasn’t anything lurking in the depths!

Looks like a brilliant day! And what a fascinating place – definitely on the to-do list for next time I’m in the UK!

It really is, and there’s loads to see in this area of the UK if you do visit 🙂

Wow – what an amazing place to visit! It reminds me of a similar place in Isle of Scilly that we went to as children – Bant’s Carn. Like Uley it has an exposed section of settlements – we used to run as fast as we could to secure the best ‘house’ – and a covered mound-like structure that you could also go inside. I have so many happy memories of this place. I’m sure your little one will never forget the mystery and adventure!
x Alice
#abitofeverything

That sounds like such fun. Its great how childhood memories stay with us. My daughter has definitely got the history bug atm, she has a huge list of places she would like to visit and I’m sure the Isle of Scilly will get added when she reads your comment!

What a fascinating place, going to pin for future reference #CountryKids

It really is fascinating. We loved that we could go inside and that there was no-one else around. It felt like quite an adventure!

This sounds like such a great place to visit for your daughter who’s studying early man. I can’t believe they built those 5000 years ago, I wouldn’t know where to start today with a digger let alone the tools they had back then. I hope your daughter learnt some new things to tell her teachers about back at school. Thanks for linking up with me on #CountryKids.

I know Fiona, and I believe that often the big stones came from quite a distance away. These places clearly meant an awful lot to these communities. It’s such fascinating history 🙂

When I saw that you had linked this up to #countrykids I HAD to check it out. I have seen it marked on local maps (living in Gloucester it’s not too far away from us) and always wondered about it, but presumed it would be a mound with bot much else to see – it definitely looks worth a visit reading this. Though I am not sure that even putting elegance aside I would be able to squeeze inside!

We often go looking for things on maps, only to find nothing much there when we arrive, so really pleased to help someone out. It is definitely worth a look and it’s near a few other places on interest too 🙂

Brilliant, I am really into learning more about barrows. There is a small one in a little village nearby to us and I really want to go and take a look. These are very impressive.