Ice bowls make a fun and elegant centrepiece for a party and making them couldn’t be more straightforward with our Blu Tack Hack.

What is Blu Tack?

Bostik Blu Tack is the original reusable adhesive. It is a permanently plastic and pliable putty which can be readily formed into any shape. It has excellent adhesive qualities and is non-toxic, making it safe for all the family to use.

What can Blu Tack be used for?

Blu tack is perhaps best known for its ability to attach lightweight objects such as posters and photos to surfaces, but that really is the tip of the iceberg for this useful product. Other uses for Blu Tack include…

What you need to make an ice bowl using Blu Tack

2 nesting stainless steel bowls (Amazon affiliate link) one slightly smaller than the other.

Hint: I advise using metal bowls for making ice bowls as both ceramic and glass. When water freezes, it expands and can cause glass and ceramic bowls to crack.

Decorations to sit in the ice (I used edible flowers).

Hint: Tap water contains lots of oxygen bubbles which give a cloudy effect when frozen. For a more transparent result, use water that has been boiled and allowed to cool.

Small can or similar to act as a weight.

How to make a pretty ice bowl decorated with edible flowers.

To begin, cut the Blu Tack into quarters, and roll each one up as shown in the photo.

Lay the flowers face out around the inside of the larger of the two bowls.

Position the 4 rolls of Blu Tack equally spaced around the rim of the bowl.

And centre the smaller bowl on top, pushing it down on to the Blu Tack.

Use a jug to pour water between the two bowls. Depending on the size of the gap, you may find that some of the flowers float up. If they do, you can use a chopstick or similar to push them back under the water line.

Place the small can in the centre of the top bowl. As the ice bowl freezes, it will expand, and the weight stops the top bowl popping off the Blu Tack under the force of the ice.

Pop in the freezer and freeze for a minimum of 8 hours.

How to remove ice bowls from their mould.

Do not be tempted to run the metal bowl under the tap. A quick release using even lukewarm water can cause fractures in ice bowls.

Take out of the freezer and leave to stand for 15 minutes. You should then be able to remove the top bowl easily. Place a plate over the outside bowl and turn over, your ice bowl will slide out on to the plate.

To return it to the freezer for storage, wrap it in plastic wrap or foil for protection.

How long an ice bowl lasts is dependent on a few factors. How thick the ice is. The ambient temperature and what you serve in it. I suggest you use it on a plate or tray to catch any water as it melts. Finally, a doily or napkin is also helpful to prevent an ice bowl from sliding about. 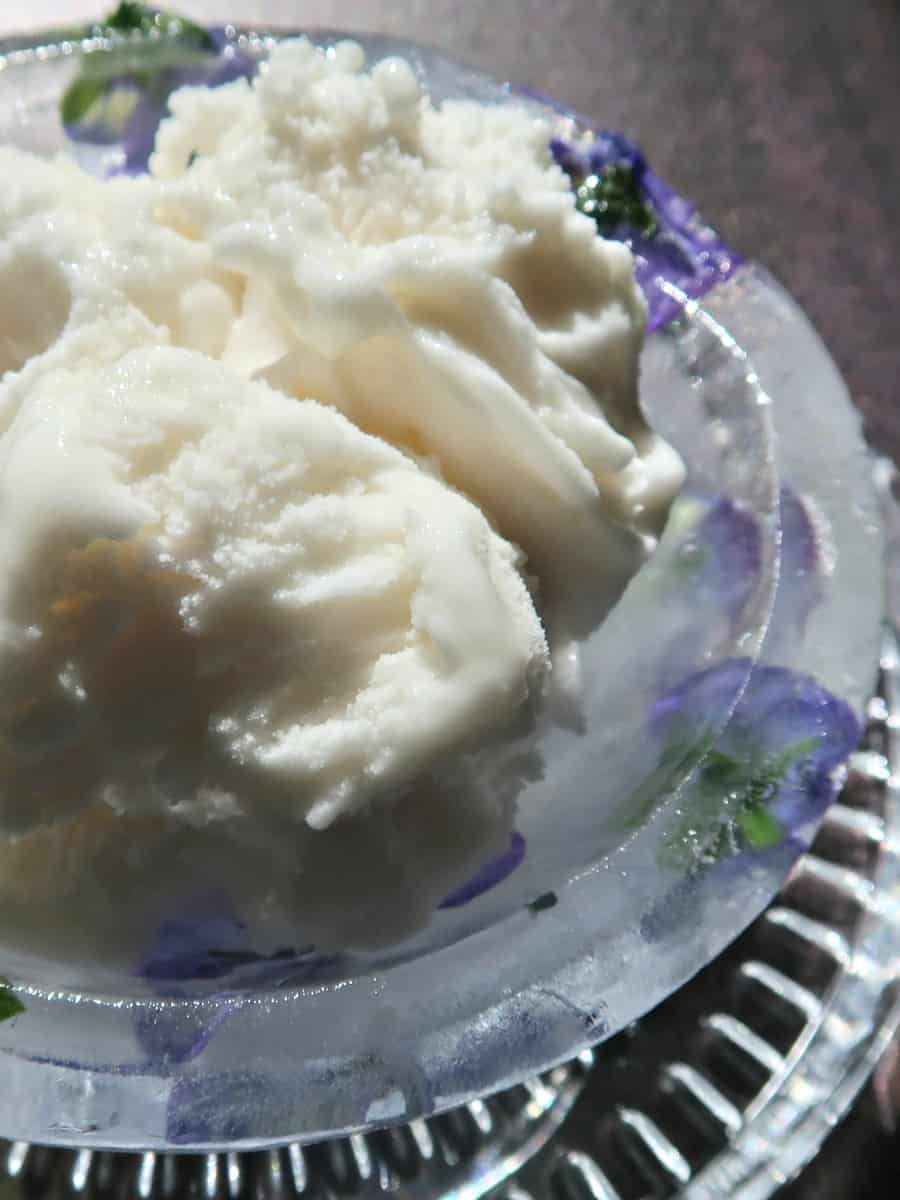 Ice bowls look gorgeous filled with delicious sorbet on a summer’s day. In winter they have the advantage that they last much longer. Why not use them to serve a batch of snow ice-cream for a unique, winter dessert.

Raspberry Gin: How To Make The Best Pink Gin

Upcycled Soap – How to Make Soap the...

How To Make Your Own Father’s Day Card

How To Make A Recycled Tin Can Owl

How to Make a Moss Pole Cable Tidy

How to Make a Paper Plant with Marbled...

How To Decorate Terracotta Pots With Netting

How To Make Candlesticks From Old Curtain Rings

How to Make Wonderful Herbal Bath Soaks at...

This is really very beautiful! It looks like a masterpiece. Well done!

Thank you Kellie. My hubby thinks they are the most pointless thing ever but they do look so pretty 🙂