Longleat Safari and Adventure Park, in Wiltshire, England was first opened in 1966. The Safari Park was the first of its kind anywhere in the world, and was considered to be a massive breakthrough in the way in which captive animals were kept, with the animals roaming freely across hundreds of acres of land, able to interact naturally with each other, while the visitors are restricted (in their cars). Longleat Safari Park and the concept of safari parks were the brainchild of Jimmy Chipperfield, who was the former co-director of Chipperfield’s Circus. The park is situated in the grounds of Longleat House, an unbelievably beautiful stately home that is a huge tourist attraction in its own right, and is the current home of the 7th Marquess of Bath.

Today Longleat’s collection comprises over 500 animals, and the whole estate is situated on 9,000 acres of stunning countryside. The house is set in 1,000 acres of parkland landscaped by Capability Brown, with 4,000 acres of let farmland and 4,000 acres of woodland, which includes a Center Parcs holiday village. As well as the world famous drive through Safari Park, Longleat boasts an adventure park that contains a whole host of attractions including Jungle Kingdom and Cruise, animal encounters and shows, fantastic play areas, mazes, exhibitions and of course the wonderful House and Gardens.

We have visited the Longleat Estate a few times before, and while we have never managed to see it all in a single visit, we’ve picked up a few tricks which work really well for us. Firstly, most visitors head straight for the Safari Park when they arrive. Consequently, as I understand it, morning is the Safari’s busiest time. As well as driving through the Safari in your own car, it is possible to buy a ticket for the Safari Bus Tour, that leaves from the Adventure Park that surrounds the house. This is the option we have gone for on the last couple of visits. It means we can park by the house, check out the other attractions, but know we have the tour booked for later in the day. It is also a great option if you are visiting with friends, as it means you can all enjoy the Safari together, rather than all being in separate cars.

Once we had our tour booked this time, there were another couple of experiences that I knew we didn’t want to miss. Firstly, we headed for the Jungle Kingdom and Animal Adventures, which is all about getting up close and in many cases among the animals. 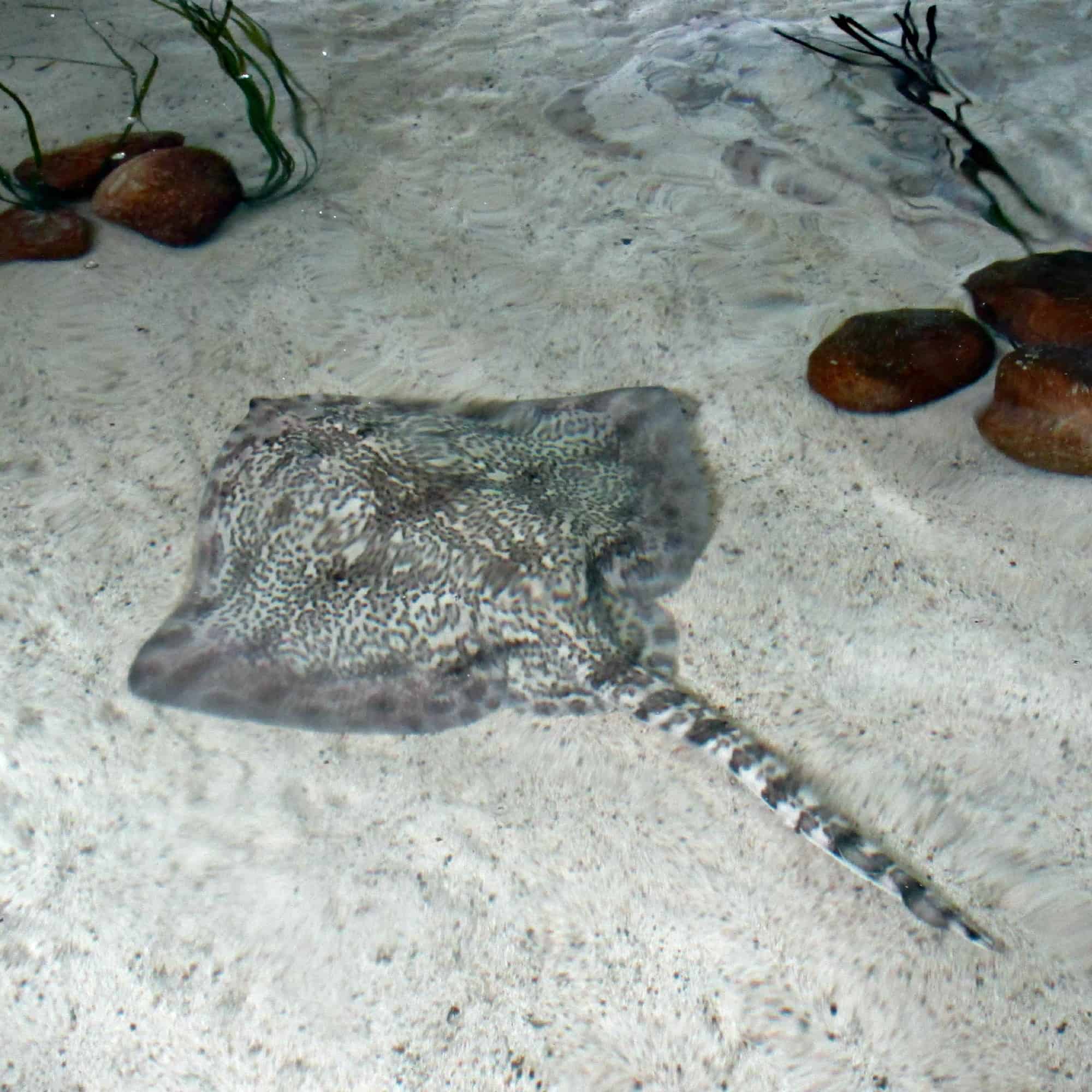 We watched the highly entertaining parrot show, held snakes and tarantulas, and fed nectar to the beautiful Rainbow Lorikeets. 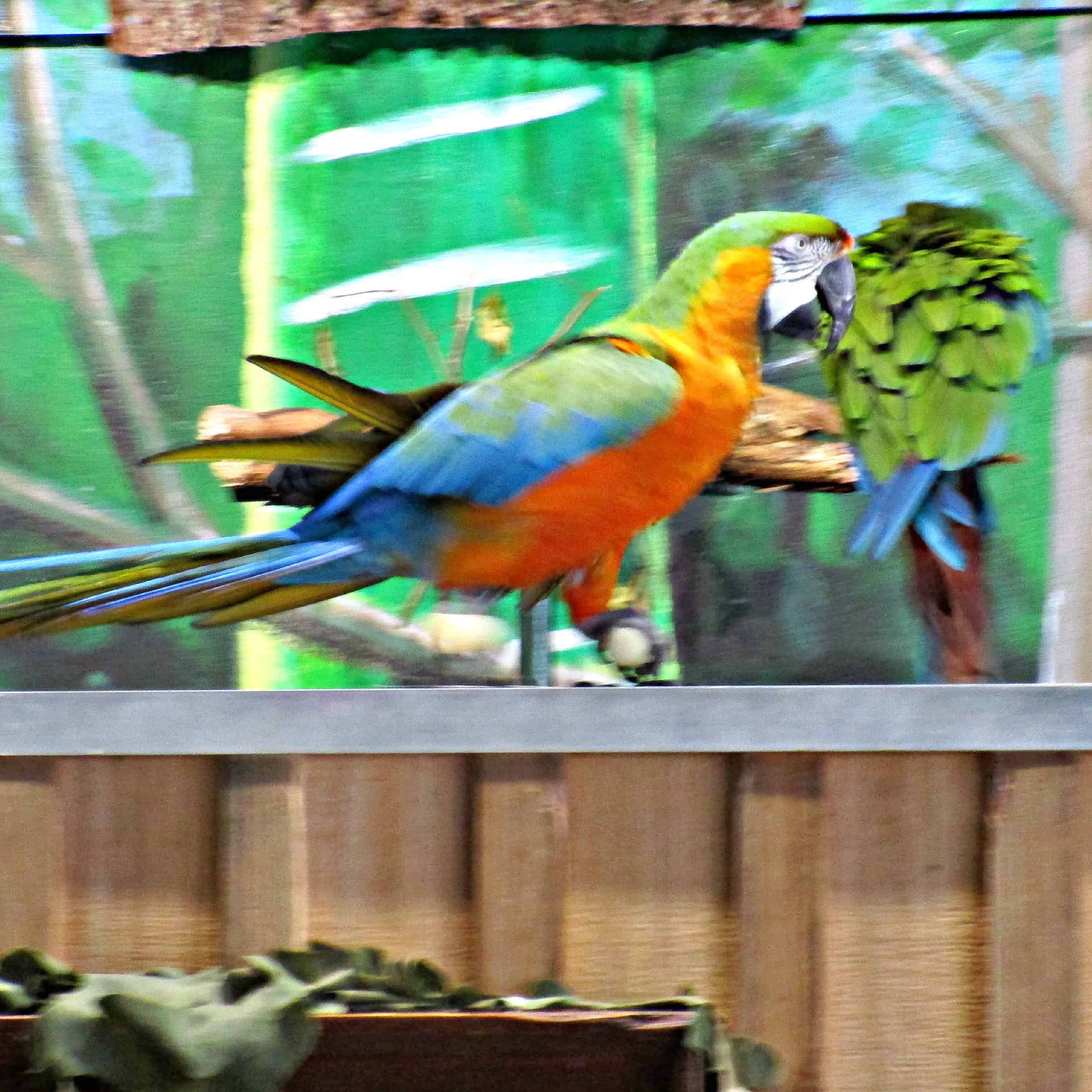 We also knew we didn’t want to miss the Jungle Cruise on the lake, which gives you an opportunity to see the Gorillas, Hippos and feed the Sea-Lions from the boat, while the guide tells you all about them. 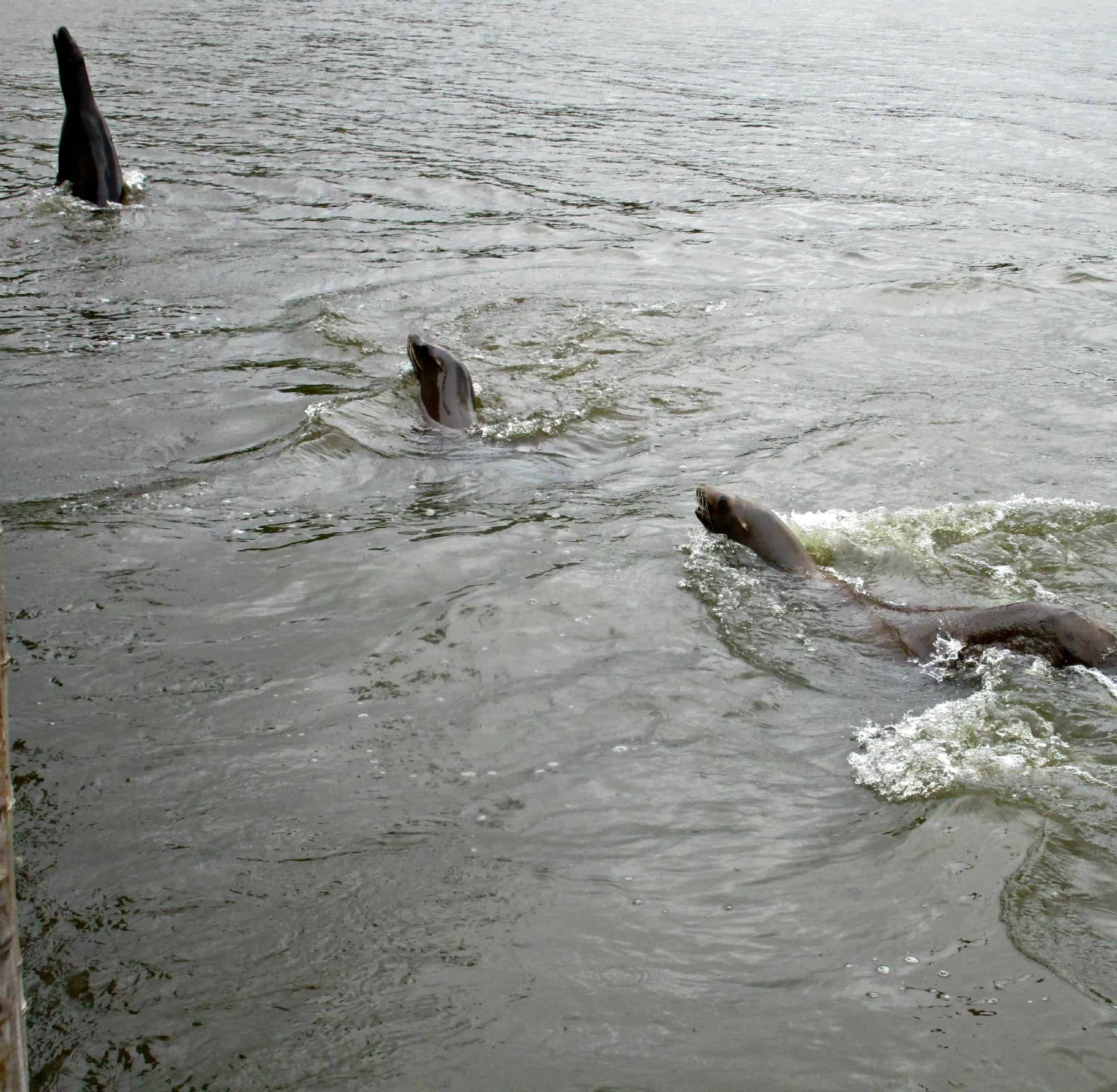 There is currently a temporary exhibit called Dinosaurs Alive at Longleat, which features 20 life-size animatronic pre-historic creatures around the park, which looked totally amazing in the Longleat setting. 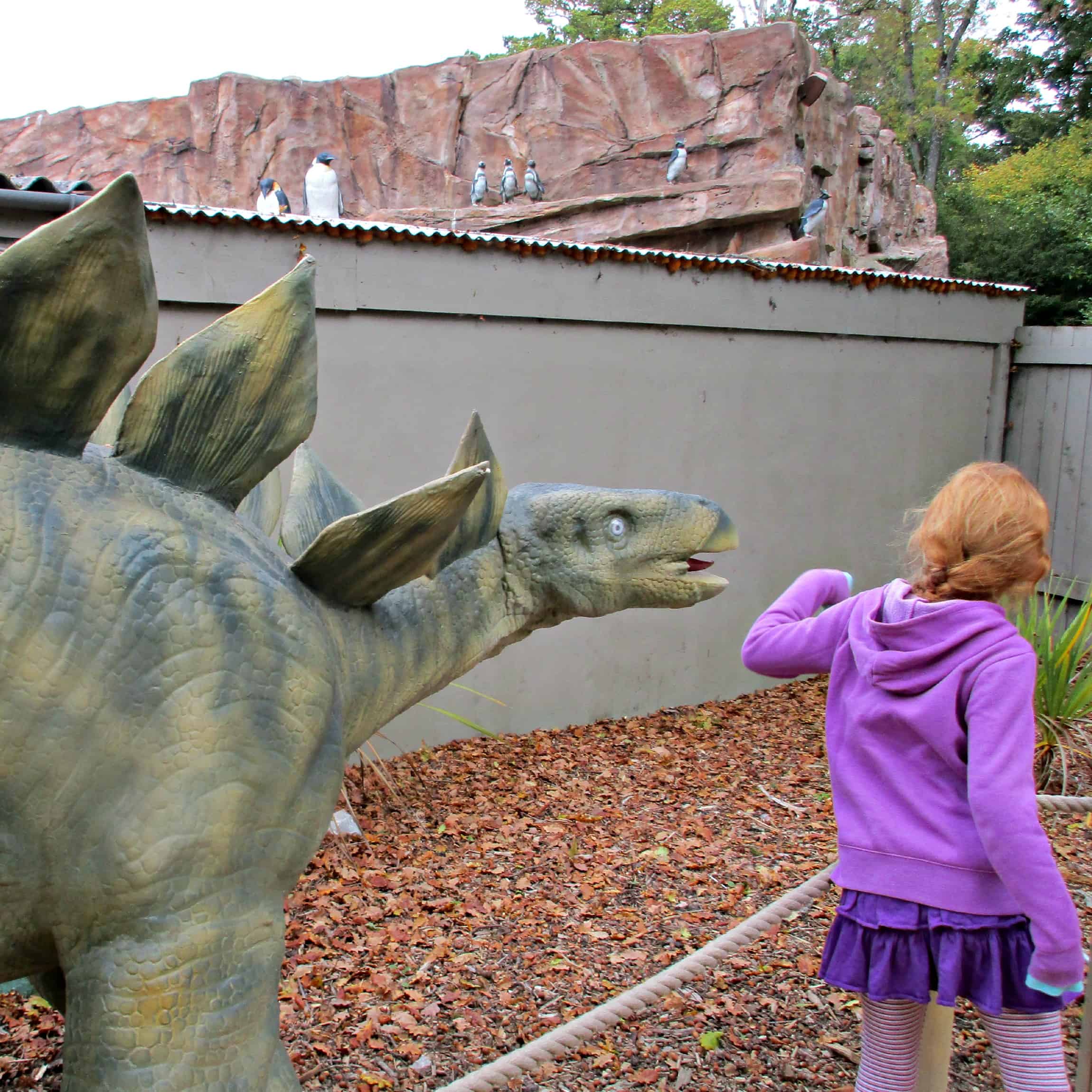 It was then time to catch our Safari Bus. The lady driver was lovely, and gave us a really fun and informative tour around the Safari Park. Having such a knowledgeable guide, really adds to the experience for us, and the bus gave us great views across the park (we sat upstairs). 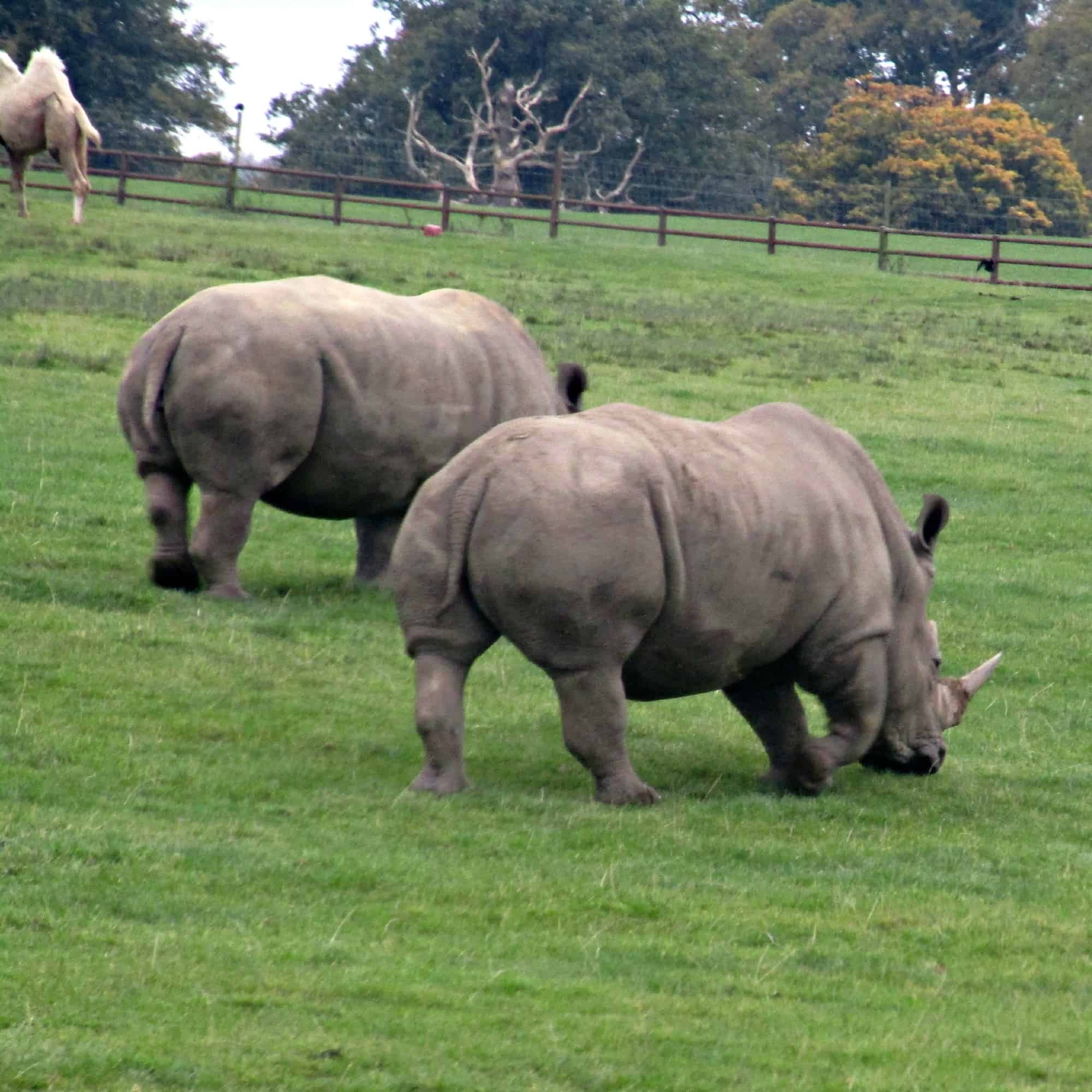 The bus is also a great way to avoid having your car damaged in the monkey enclosure, and gave us a perfect view of them happily pulling bits off other visitor’s vehicles, much to everyone’s amusement – apparently their vandalism comes mainly from their fondness of windscreen wash which contains alcohol! The photo below shows a cute little guy who was hiding at the entrance of the enclosure waiting to ambush cars!

Longleat, of course, is most famous for its Lions. It is difficult, today, to imagine the consternation aroused when Longleat’s plans for an initial 100-acre lion reserve were made public. It is reported that there were dire warnings of big cats running amok in the Wiltshire countryside, local clergymen were up in arms, and there were even questions asked in the Houses of Parliament! Our driver told us that the first lions to arrive at Longleat were 50 ‘extras’ from the wonderful film ‘Born Free’ which was released the same year that the park opened.

We had an amazing day out at Longleat, and although the kids were a little disappointed that we didn’t make it into the mazes or house yet again, we really did pack in a lot! It really is a pleasure to see such beautiful animals in such a wonderful setting! For more fabulous family days out check out 12 fabulous places to visit in and around the Cotswolds.

How To Make Easy Gingerbread Mummies

This is historical and charming park. Its views are very attractive and it is an adventurous park to visit.

It is a fabulous day out and a beautiful spot 🙂

Great post, we are off next week for my daughters birthday, the lights are going to be beautiful! Can I ask how Long the safari bus took? Does it run regularly? We want to book the Santa train but can’t decide what time! Thanks
Emily

It took about an hour and a half (that’s with a little stop by the giraffes). We caught the 2 O’clock one, but I’m not sure how frequently they run – got a feeling they have a couple of buses, but not sure if they run both all the time or just in peak season x

Wow, must have been quite a special experience/s! I’ve long wanted to go here, or Whipsnade, but we recently got a new car so have been pretty apprehensive about the potential for monkeydamage… 😀 But maybe we could brave it in a bus then 🙂 #countrykids

The monkeys do definitely damage the cars. Every time I’ve been there’s been a warden in there retrieving bits and pieces of trim, so the bus is a great option 🙂

I am considering getting tickets to Longleat for the Christmas lights, thanks for the tips on seeing the other attractions, Monkey would love the dinosaurs I am sure! #whatevertheweather

The Dinosaurs were amazing – they definitely looked perfectly at home there! The Christmas lights look as though they are going to be stunning, they had started setting them up when we visited 🙂

What a fabulous trip, I’ve always wanted to take my lot up to Longleat but it’s difficult to plan those trips. I never realised quite how much there was to see and do around the site and I’m even more determined to get there one day. It’s great that your lot all enjoyed themselves, even if they didn’t get to do all of the activities they wanted to. Thanks for linking up with me on Country Kids.

It is a great place, you could really do with 2 days to see it all. A few years ago they ran family camping within the grounds there which must have been fab – imagine lying in a tent listening to lions roaring (not actually sure how relaxing that’d be!) Thanks for having us on CountryKids x

We love Longleat and actually haven’t done it all either. We didn’t manage a summer day trip this year but are going for the Festival of Lights. Lovely and informative post #countrykids

We drove passed there today. The colours are beautiful. Been to various events and, of course, the safari park. There is so much to do.#CountryKids

We haven’t been here yet but it’s definitely on he to do list. It looks huge!

It is a great day out – you really do need to make it a whole day to get to see it all (or at least most of it!) 🙂

I really can’t get over how much there is to do there. I really always assumed it was just a drive through safari park. It looks like you can go back three or four times and still have different things to try out. I do love a good maze and house so I’d have to go back again if I were you. It’s so good you can get buses and do the safari part together as well. I adore Lorikeets. They’re so beautiful. You can feed them in our local zoo too and it really is a lot of fun and they’re so friendly. I must put this on my to do list for next year because it’s really not that far away. It looks like the perfect family day out. Thank you so much for linking up to #whatevertheweather xx

It really is a big place. The setting is unbelievable, a truly stunning landscape. When we visited they were setting up for their festival of light which runs over Christmas. (It’s thousands of Chinese lanterns) which I’d really love to see, so we may go back for that. The Lorikeets are lovely, the were all over my daughter and had to be coaxed of her at the exit. We decided it was because of her red hair and bright clothes – they clearly thought she was a parrot too! Thanks for having us on #WhatevertheWeather x

I’ve always wanted to visit Longleat, it certainly looks like it would be a fantastic place to visit. I didn’t realise how big it was though! If we ever go then we’ll take the bus, or put some old windscreen wipers on the car. I have visions of a queue of cars leaving Longleat with bits hanging off! It must have been so strange when they first thought about having lions kept nearby. We used to live across the river from Blairdrummond safari park and in 2010 with the really bad snow we had to leave our cars a mile away after work each day and walk home in the dark along the icy road, we could hear the lions roaring in the distance, but they sounded a lot closer than I thought they should, so I can imagine how scared locals would have been when they first brought the lions in!
Thanks so much for linking up to #Whatevertheweather 🙂 x

I’ve heard you can hear their roars over long distances. Must be more than a little unnerving! Apparently you can hear the wolves howling as well around longleat, which also would be quite something 🙂

This looks amazing – I’ve never been but have wanted to for a long time now. Thanks for the tip about getting the bus tour, I can’t imagine my husband would be too pleased if our car got trashed by monkeys… #letkidsbekids

Longleat does look like a great day out. We must go as it’s not too far from us. I like the tip of taking a bus tour.
Thanks for sharing #LetKidsBeKids

It is a lovely place to visit, and they always seem to have something different going on every time we go