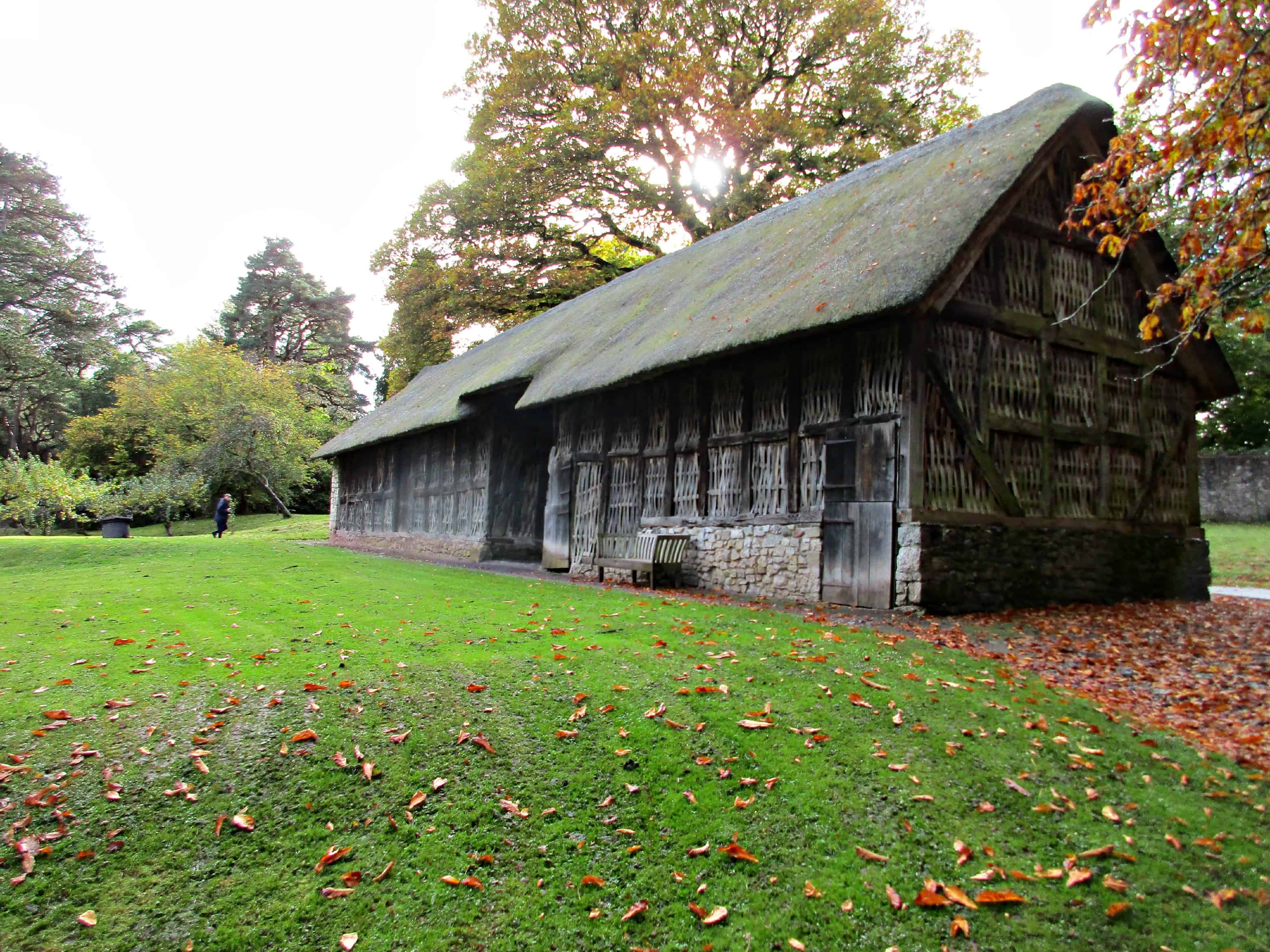 Over half-term we visited St Fagans National History Museum. It is an open-air museum in Cardiff chronicling the historical lifestyle, culture, and architecture of the Welsh people. Set in the grounds of St Fagans Castle, an Elizabethan manor house, the 100-acre parkland is now home to over forty original buildings, moved from various parts of Wales and re-erected to show how the people of Wales lived at various times in history. The museum was started in 1946 following the donation of the castle and lands by the Earl of Plymouth to the people of Wales. It opened its doors to the public in 1948, under the name of the Welsh Folk Museum. 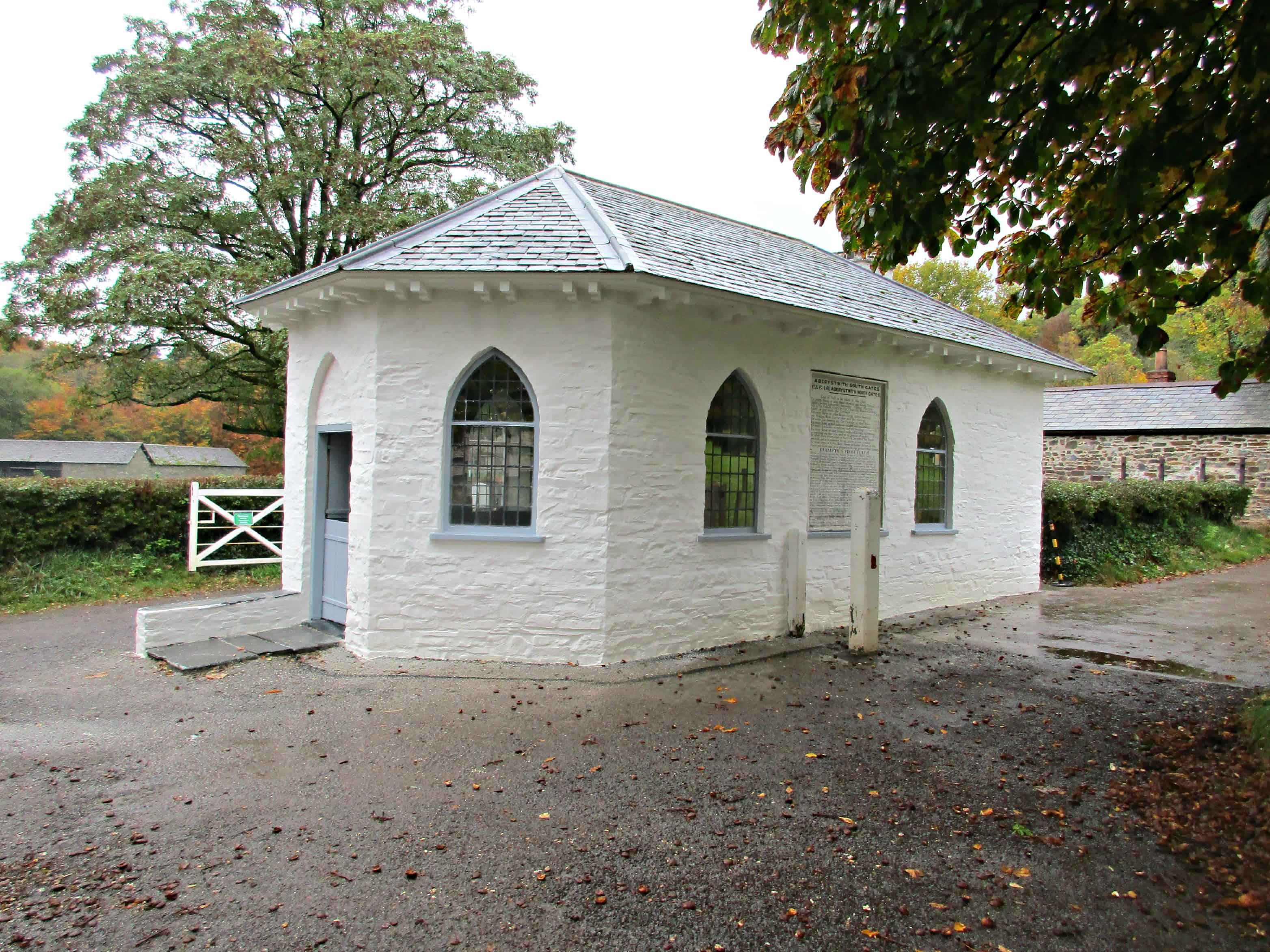 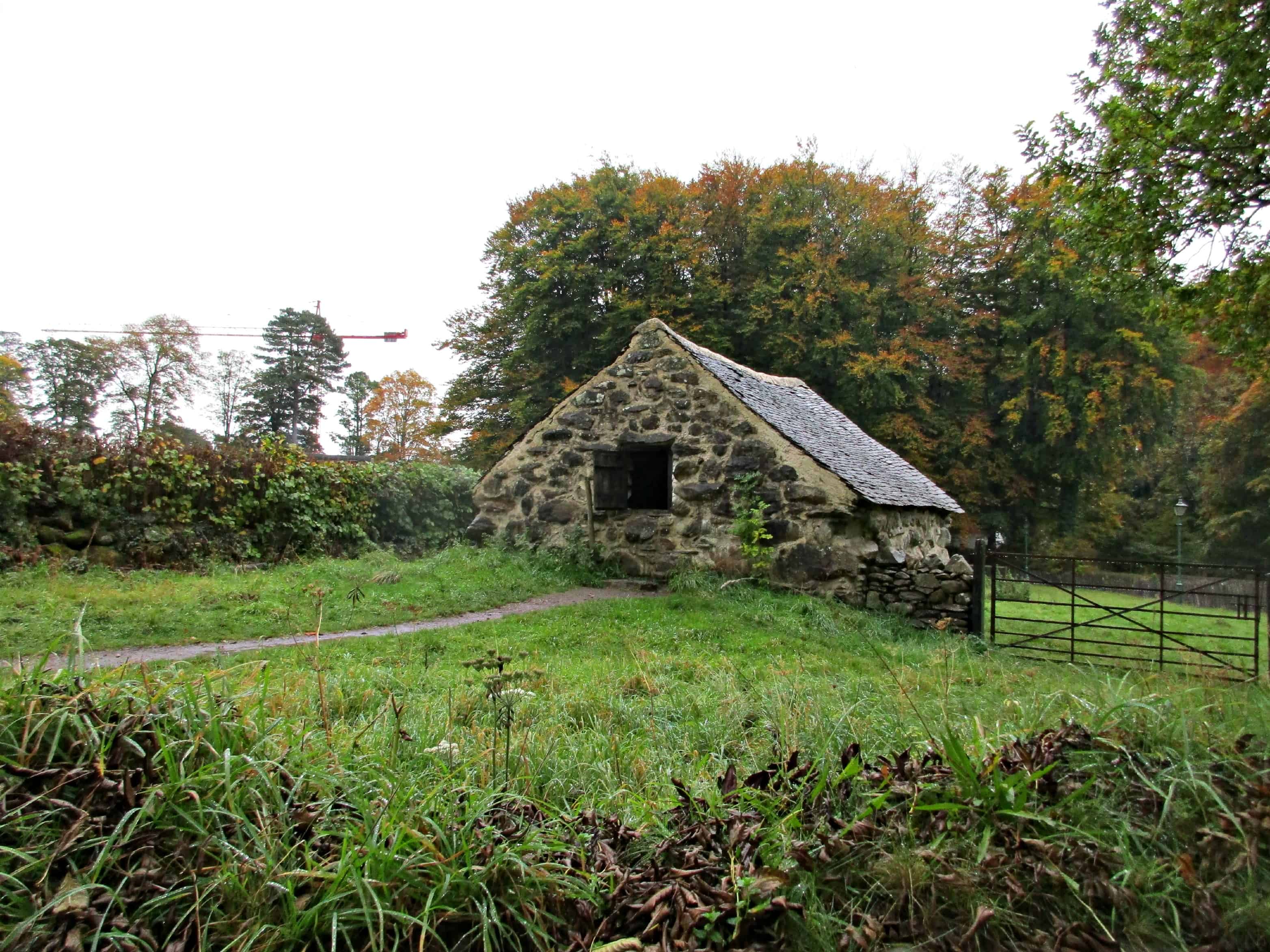 The Museum shows how the people of Wales lived, worked and spent their leisure time over the last five hundred years, and the buildings reflect that; there are farmhouses, mills, worker’s cottages, shops, a school, a chapel and church, tannery, cockpit and Workman’s institute among many others. 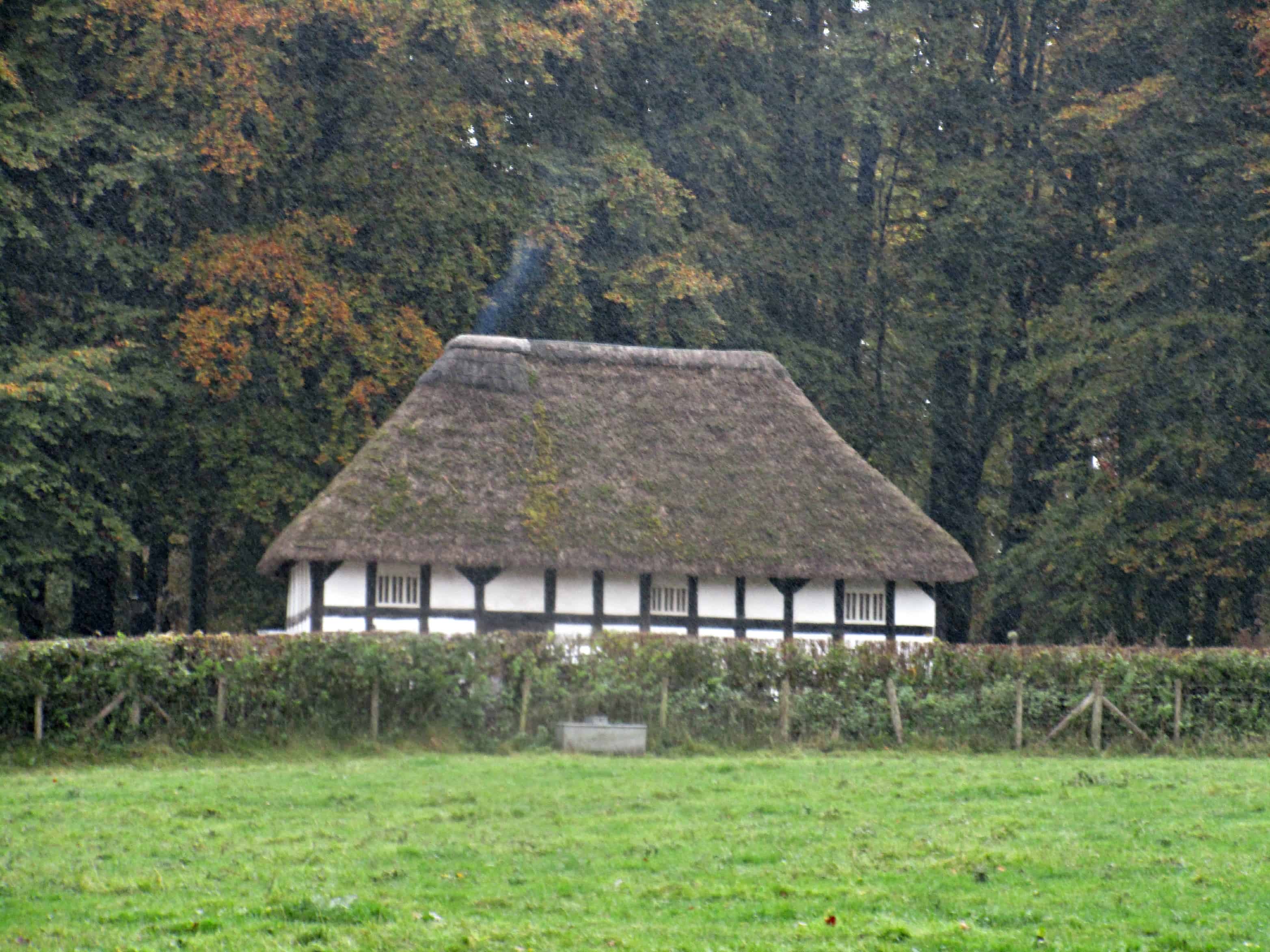 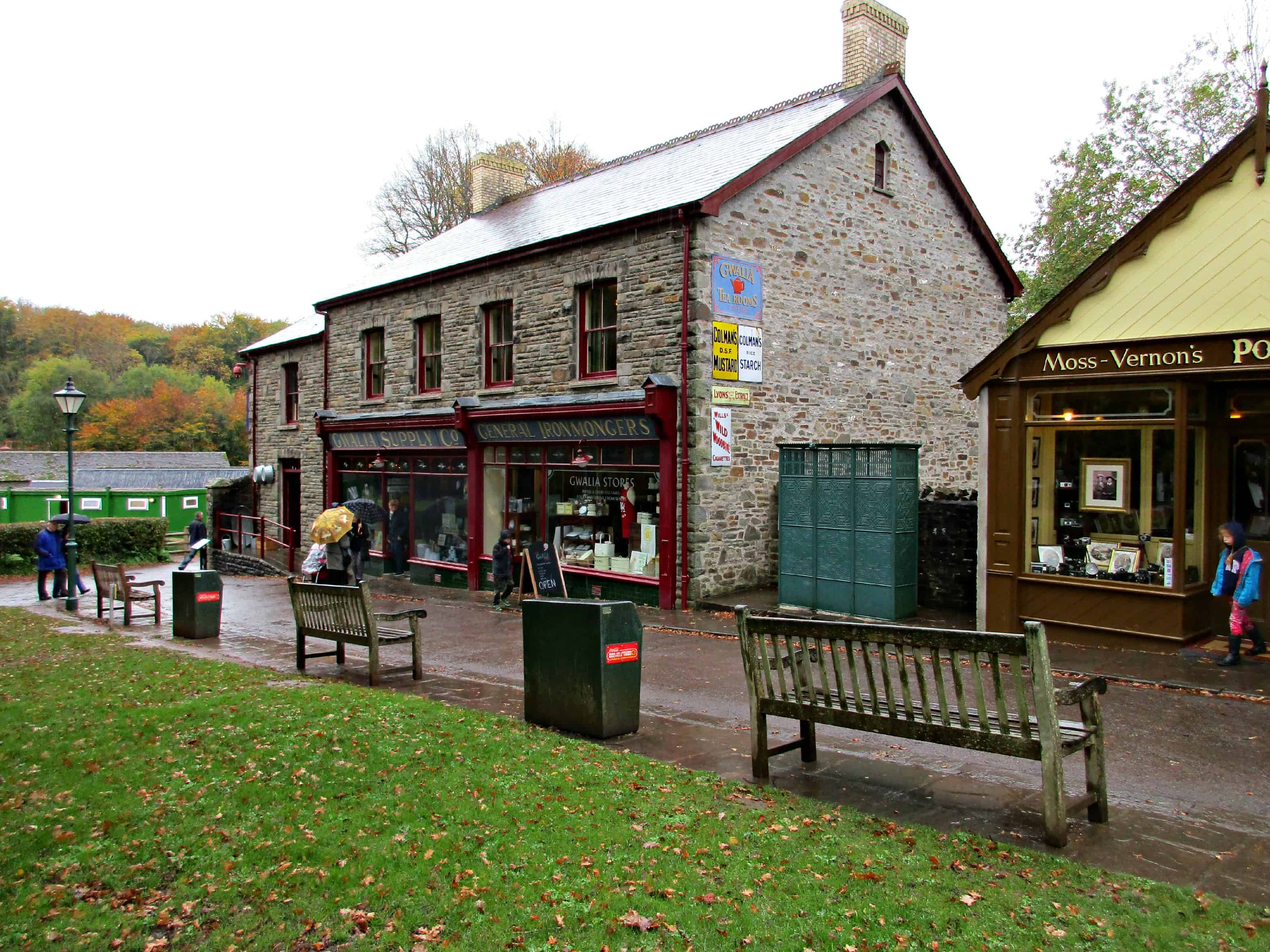 Each building is furnished at a particular point in time, and many have their own gardens which have been planted to be historically correct as well. Outside each building there is an information board explaining where the building originated from, its history and in most cases pictures of it in its original location, which really brings their history alive. Inside each furnished house, the fires were lit, and a guide was on hand to chat about the buildings and the museum in general. The photos below are the exterior and interior of Nant Wallter Cottage; built out of Clom (clay or mud mixed with straw, earth and small stones, and built in layers) dated 1770, and furnished as the home of a farm labourer at the end of the 18th century. 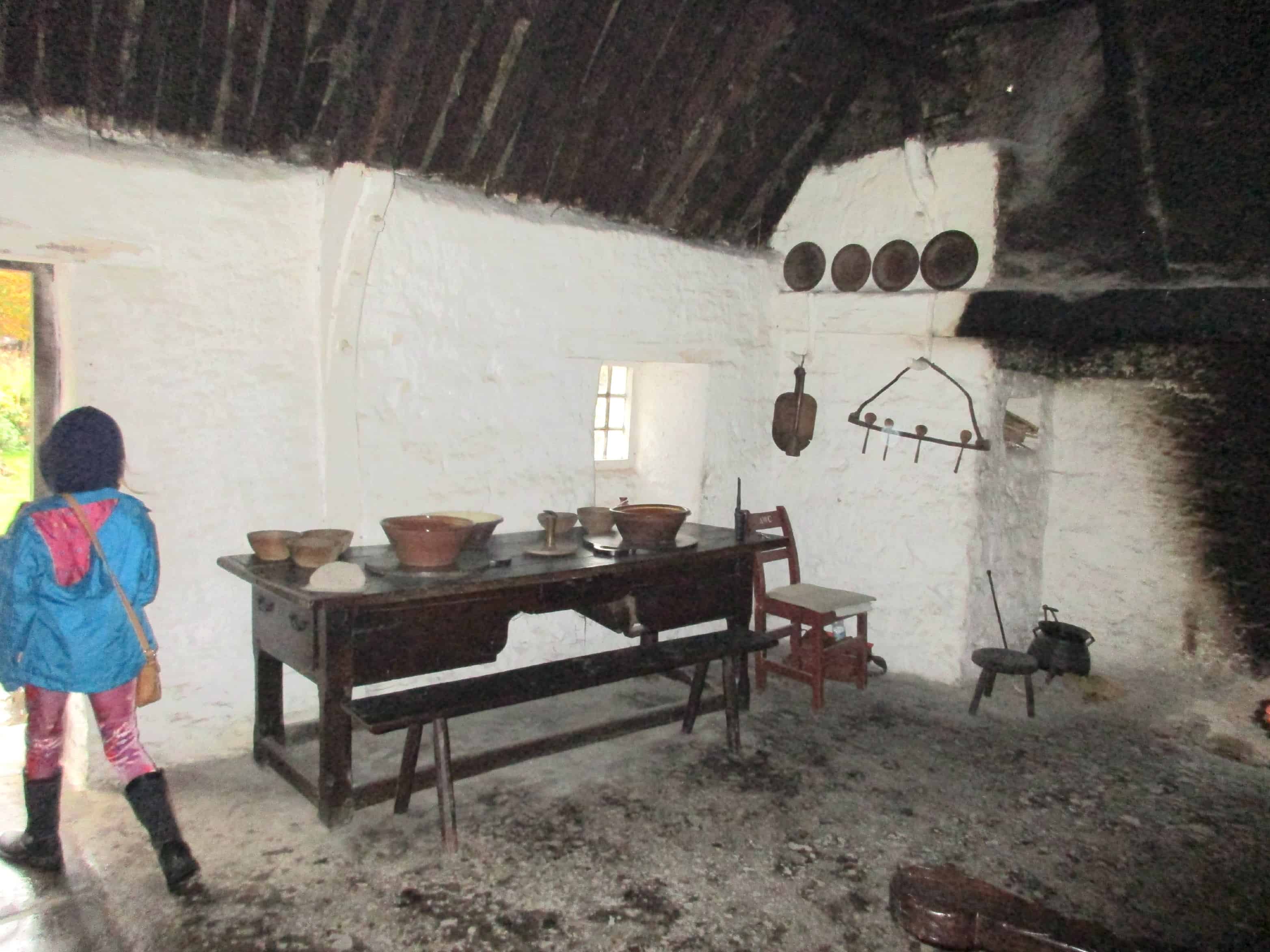 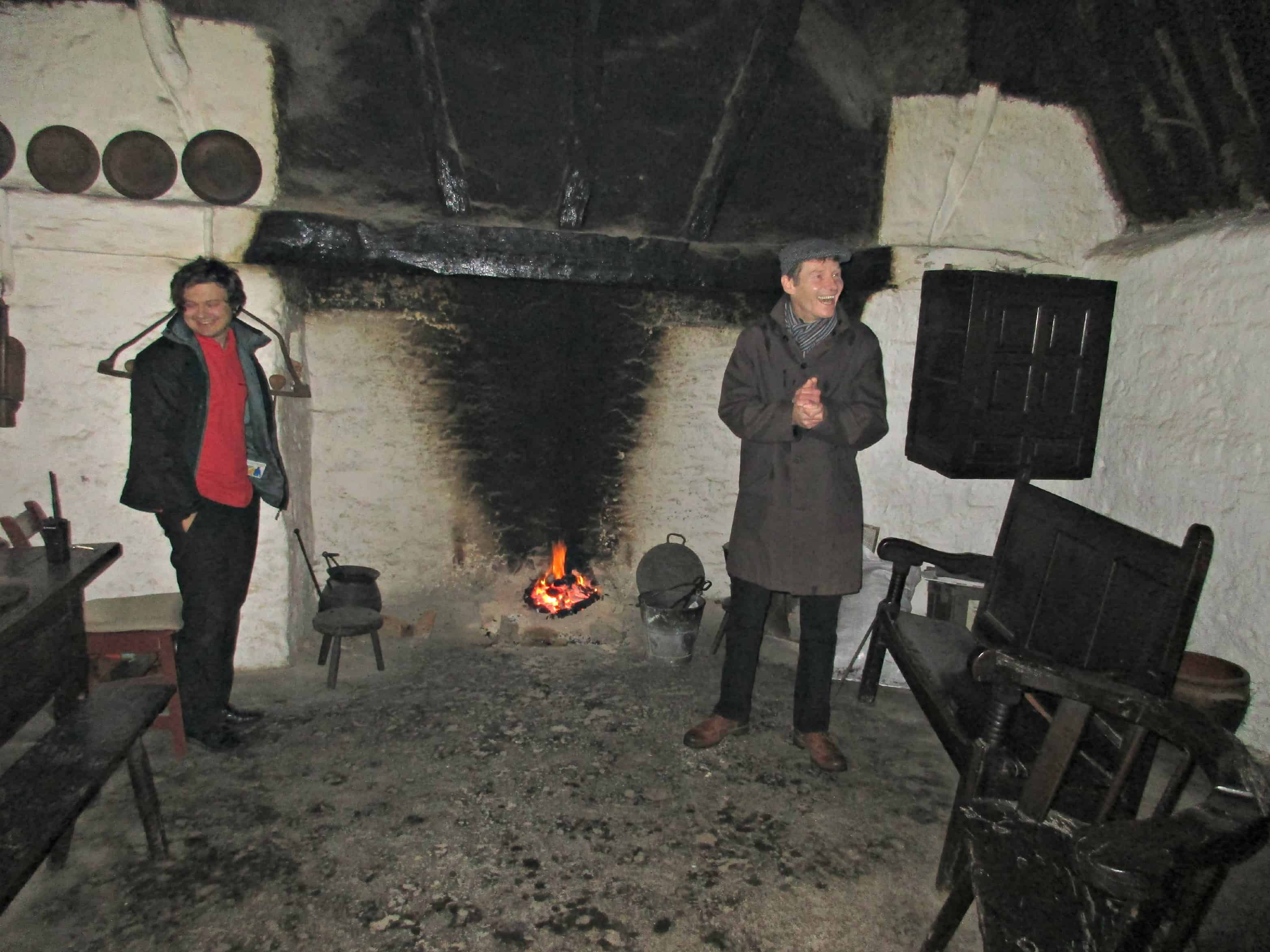 This small late-medieval house shown below was originally sited in Haverfordwest, Pembrokeshire. and is dated around 1580. It is thought to have been home to a trader, and the guide inside told us that it was in fact grand for its time as it contained an early toilet, which was a hole in a seat with a lid (to the left of the ladder) dropping straight outside! 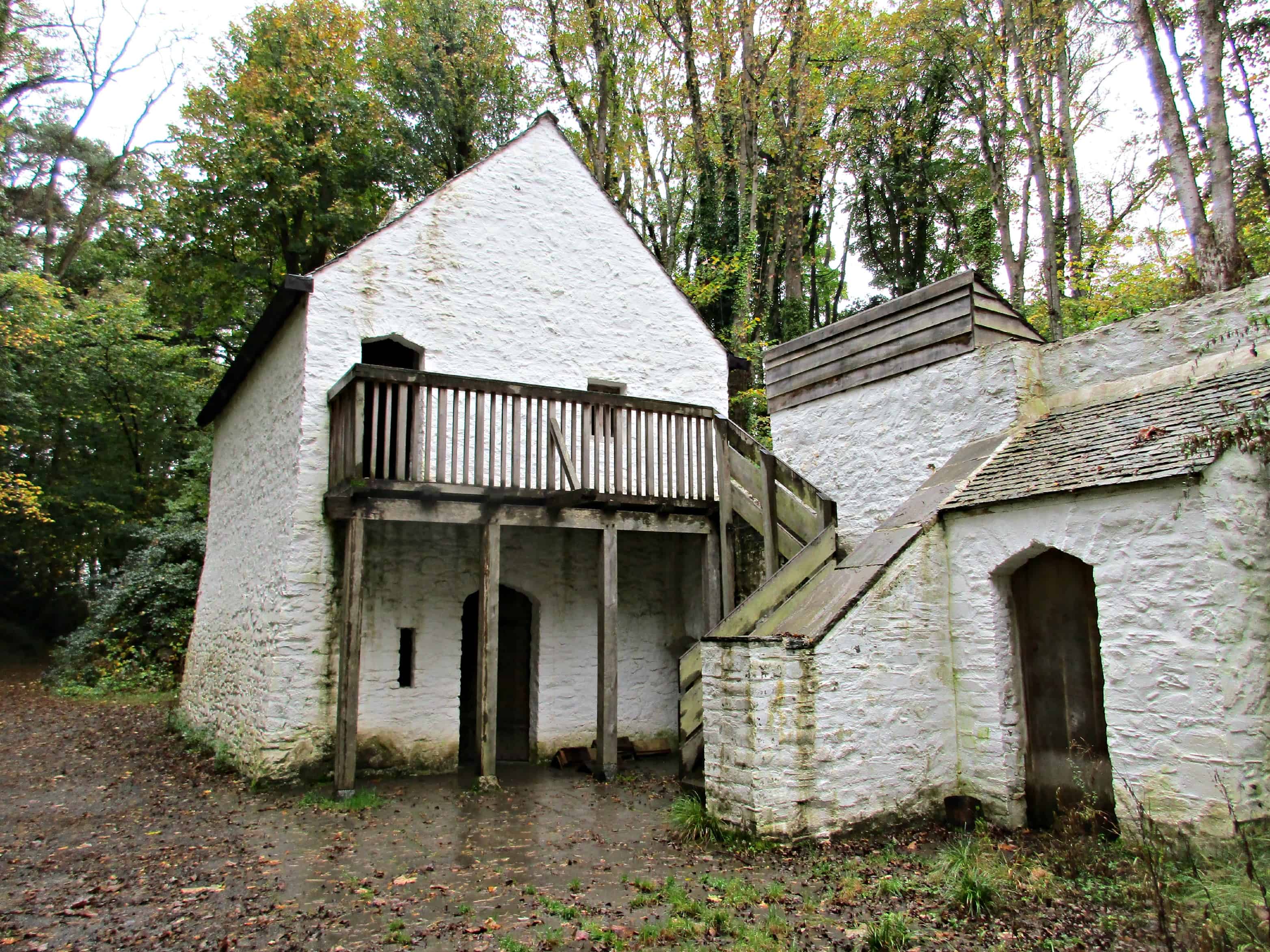 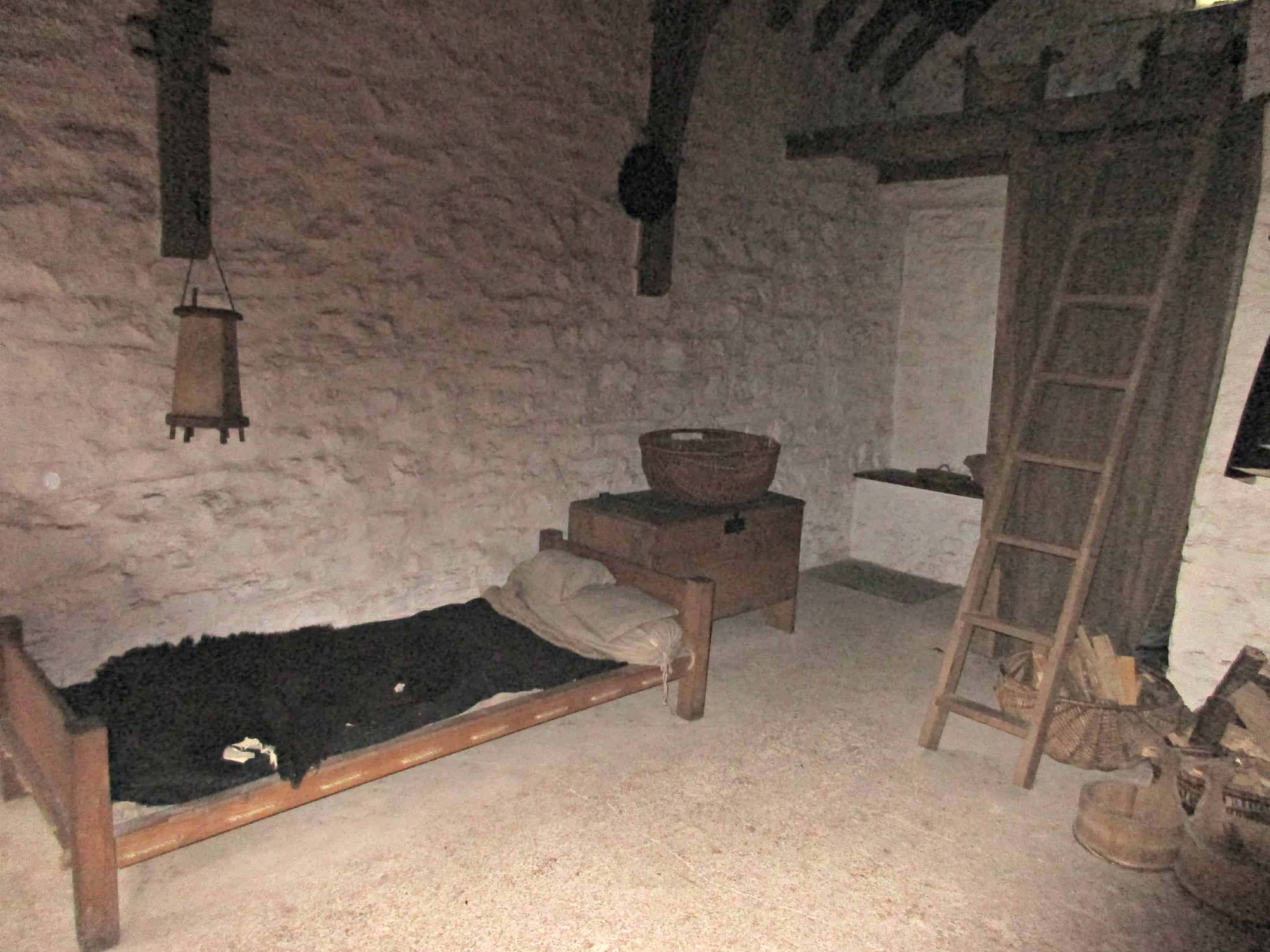 The School house was built in 1880, and was originally located in Maestir, Lampeter. It is arranged as it was in 1900 when Miss Rachel Ann Thomas was headteacher, and includes an assortment of desks for pupils of different ages, from five to fourteen, all of whom were taught in the single classroom. The kids were horrified when they spotted the canes, they truly cannot believe that teachers used to hit children with them! 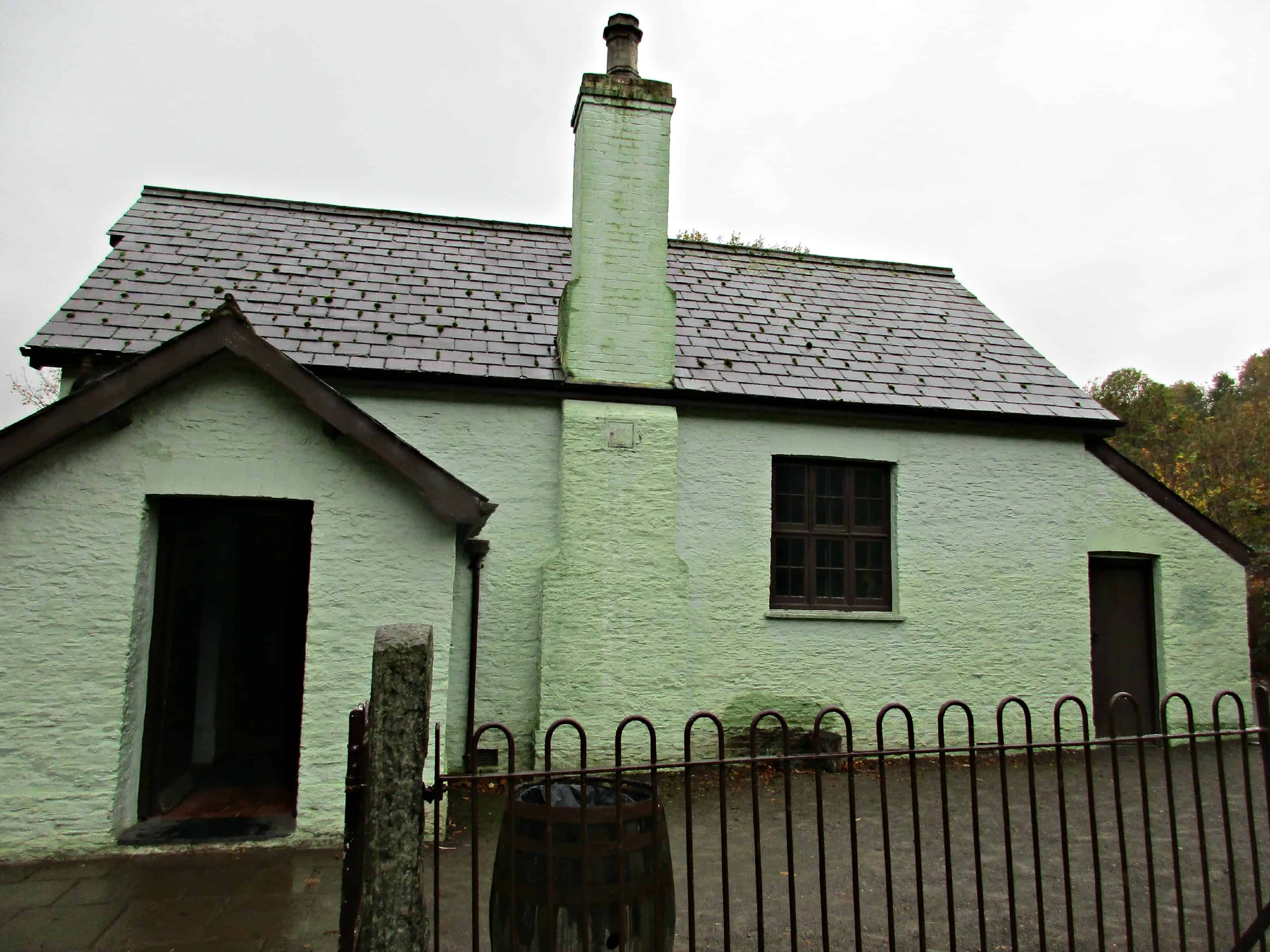 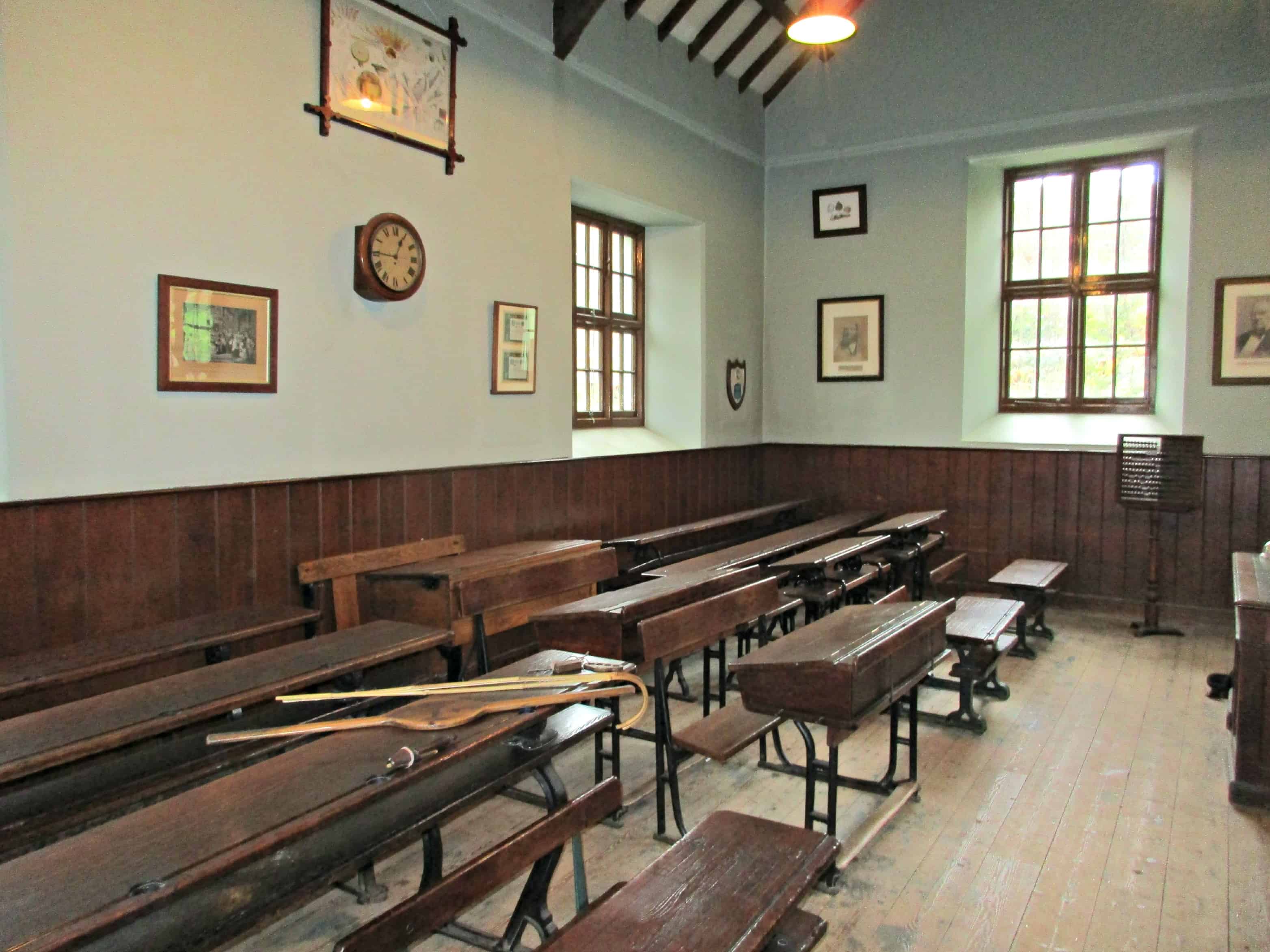 One of our favourite buildings was the Gwalia Stores. The shop has been shown as it would have been in the late 1920s, fitted with mahogany shelving, counters and bins by Parnalls of Bristol. Next to the stores was a portrait gallery where you can dress up in period costume and have your photograph taken in a vintage style (if you have children who are compliant – which ours declined to be!). 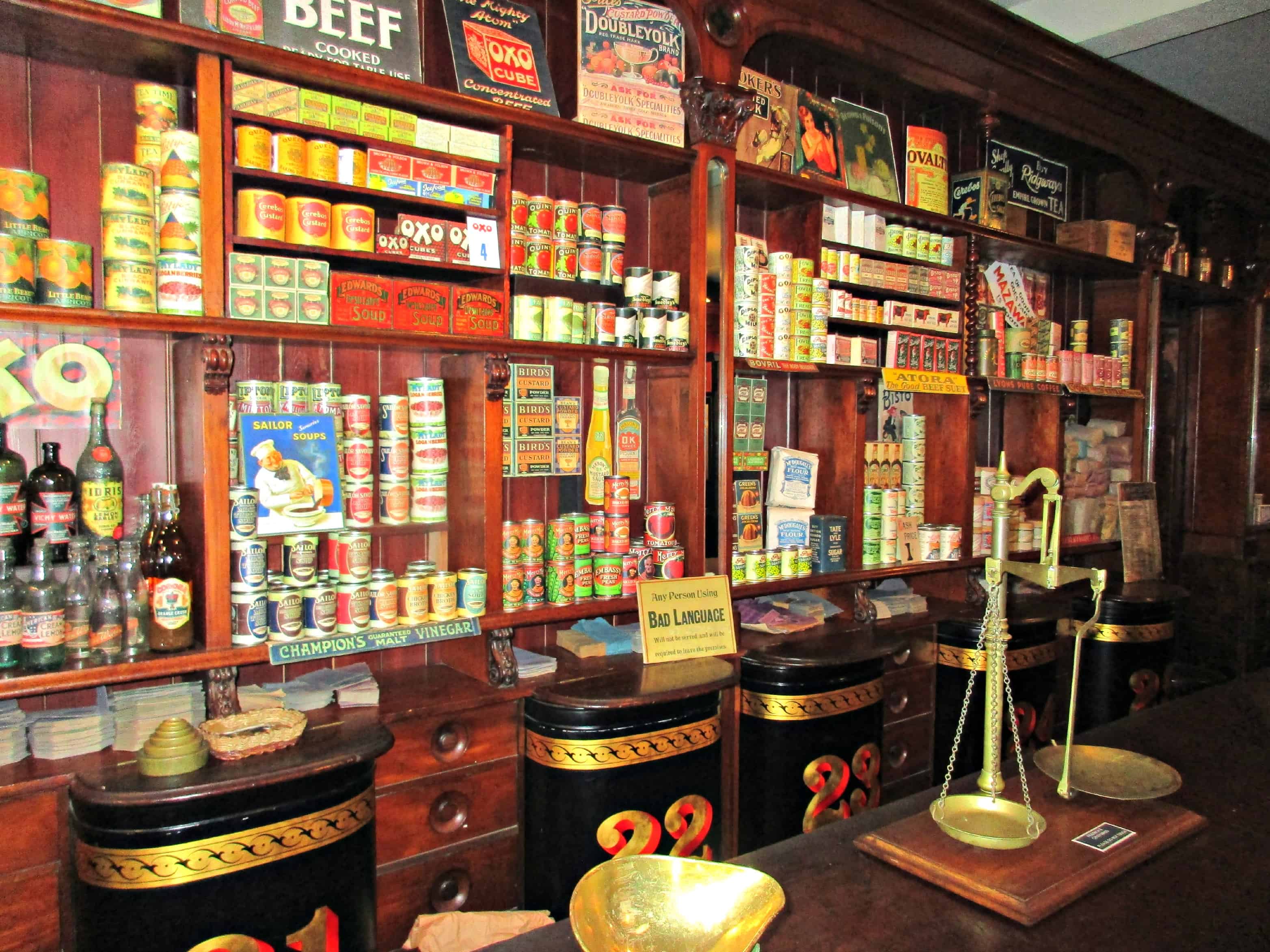 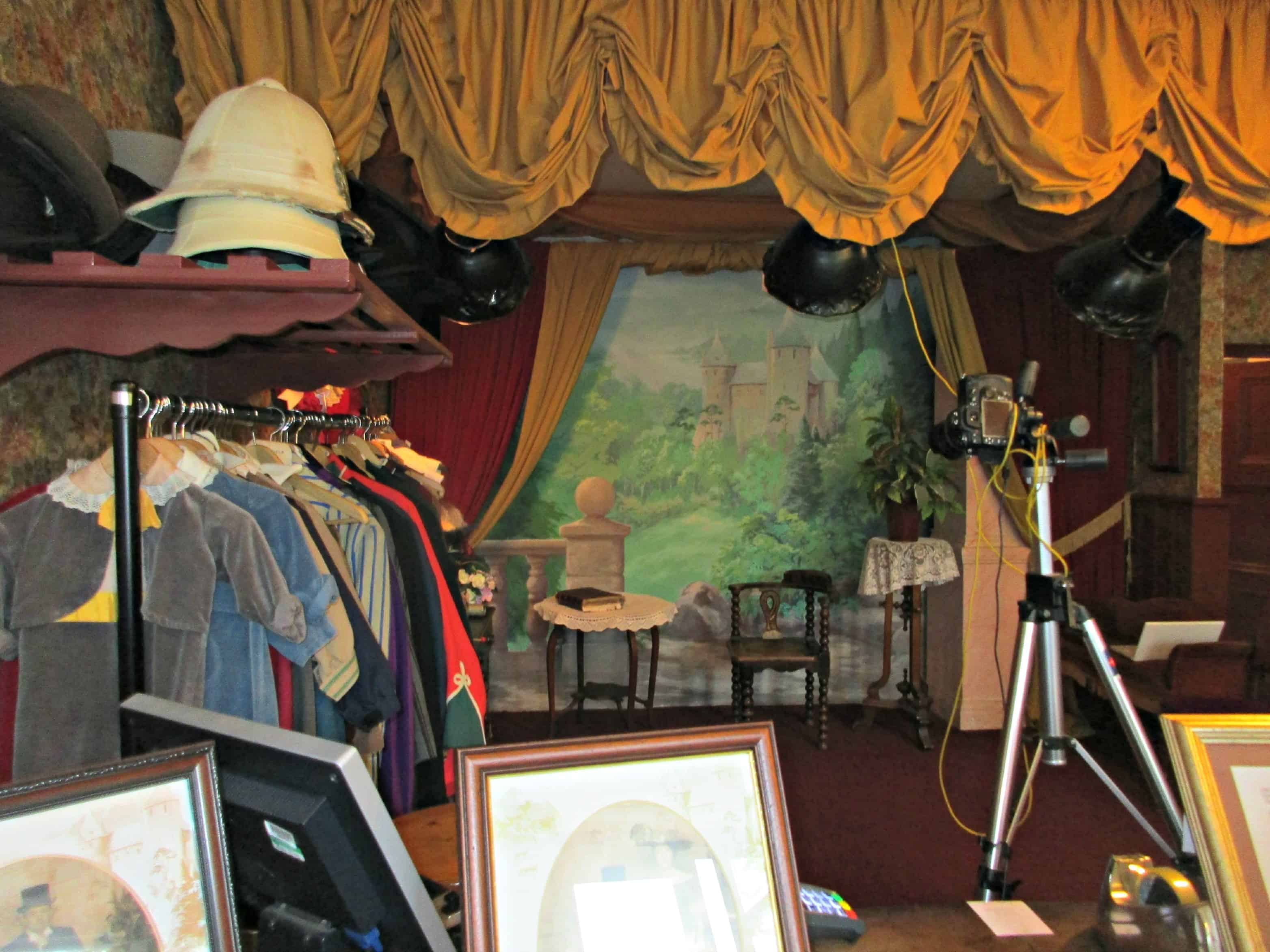 The museum holds displays of traditional crafts with a working blacksmith forge, a pottery, a weaver, miller, and clog maker. It also includes two working water mills: one flour mill and one wool mill. Part of the site includes a small working farm which concentrates on preserving local Welsh native breeds of livestock. Produce from the museum’s bakery and flour mill is available for sale. 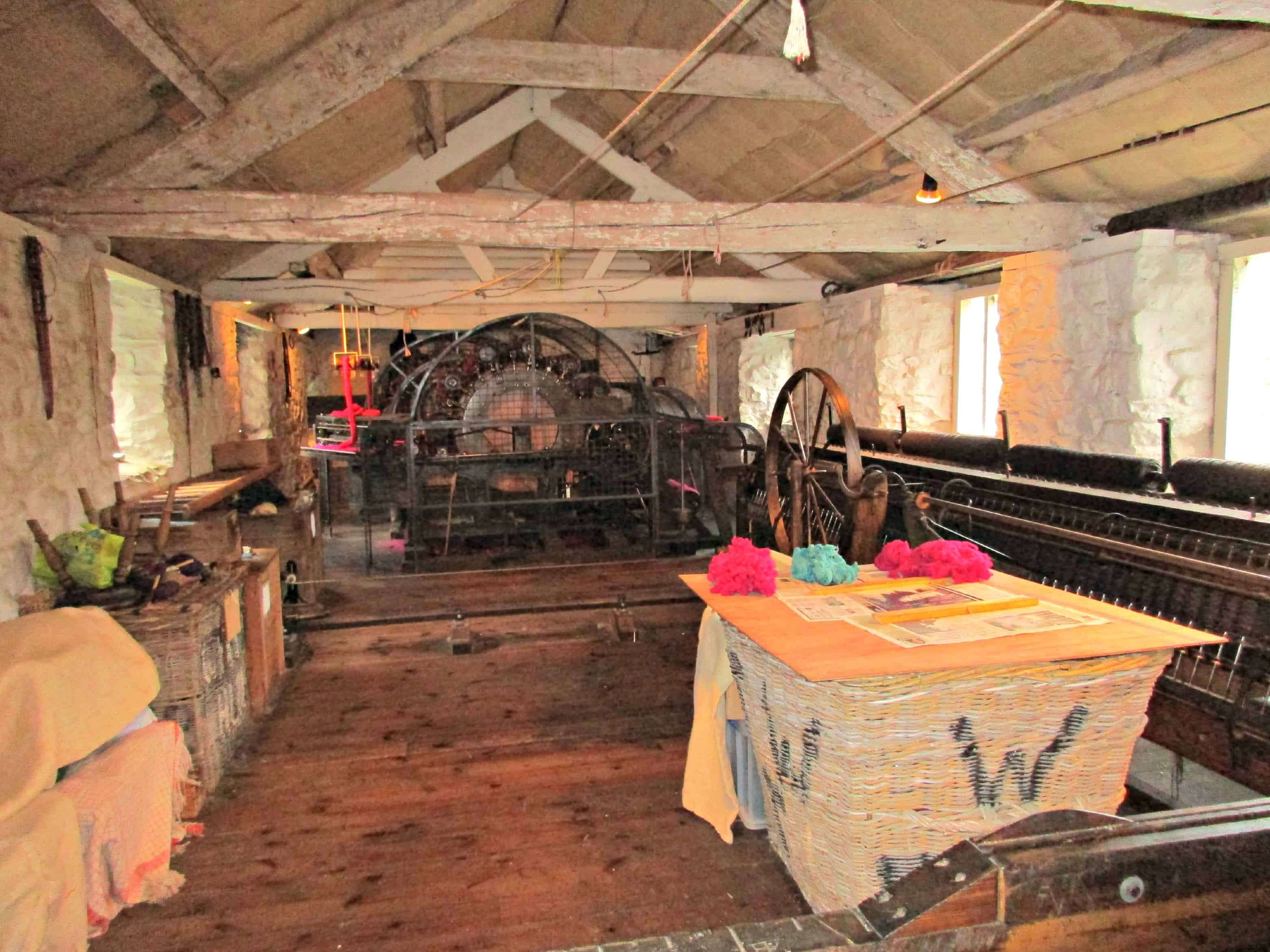 The indoor galleries housing exhibitions of costume, daily life and farming implements were closed when we visited – the museum has been granted a large lottery grant and is currently revamping its exhibition buildings. They are also currently working on the construction of an Iron Age farmstead from Anglesey, and Llys Rhosyr, a thirteenth-century court of the princes of Gwynedd, both reconstructions based on archaeological findings. The plans suggest the place will be even more remarkable, once the new building work is finished. We were able to visit the Iron Age roundhouse which is currently only accessible on weekends, due to building work in the week. 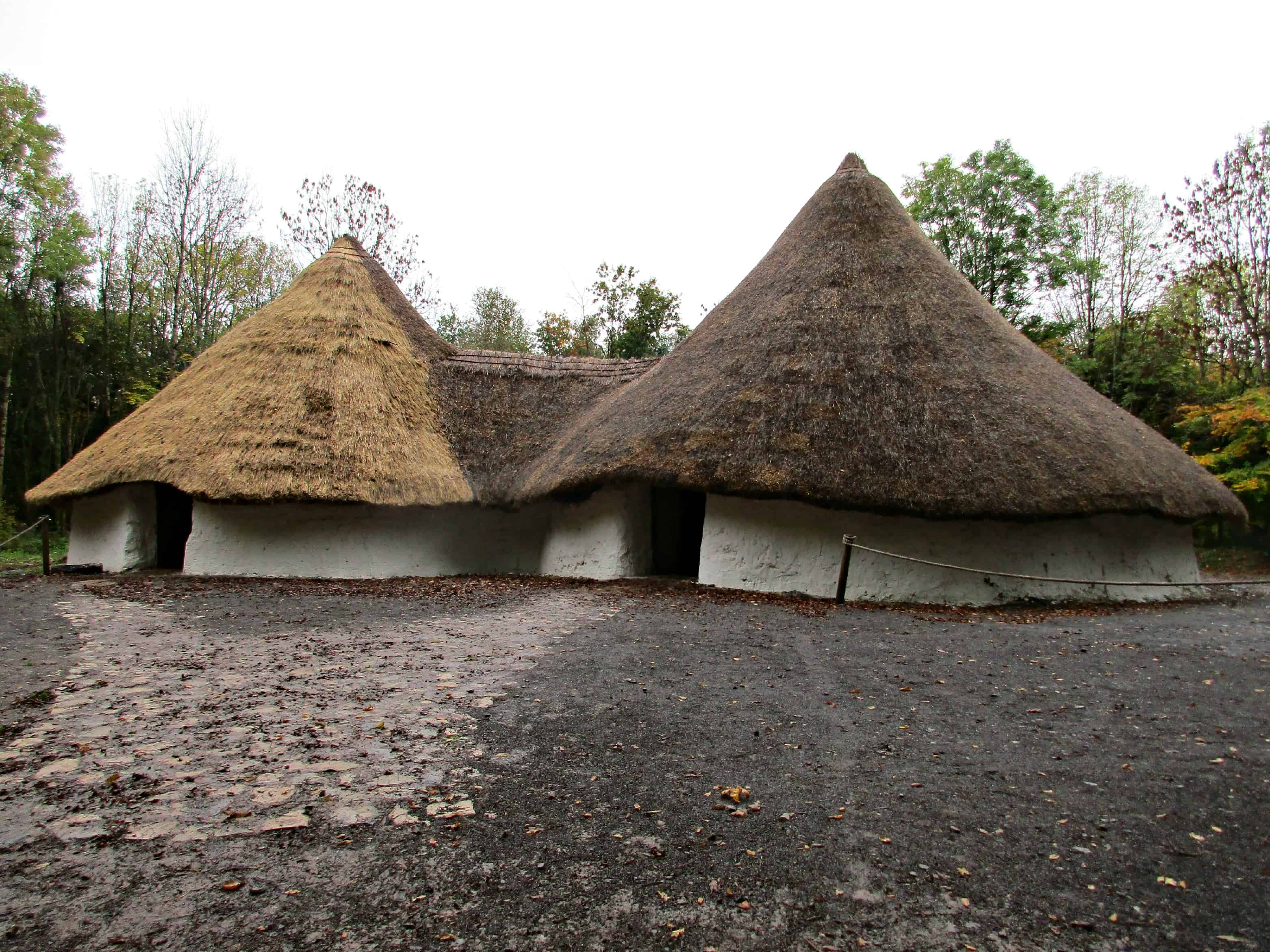 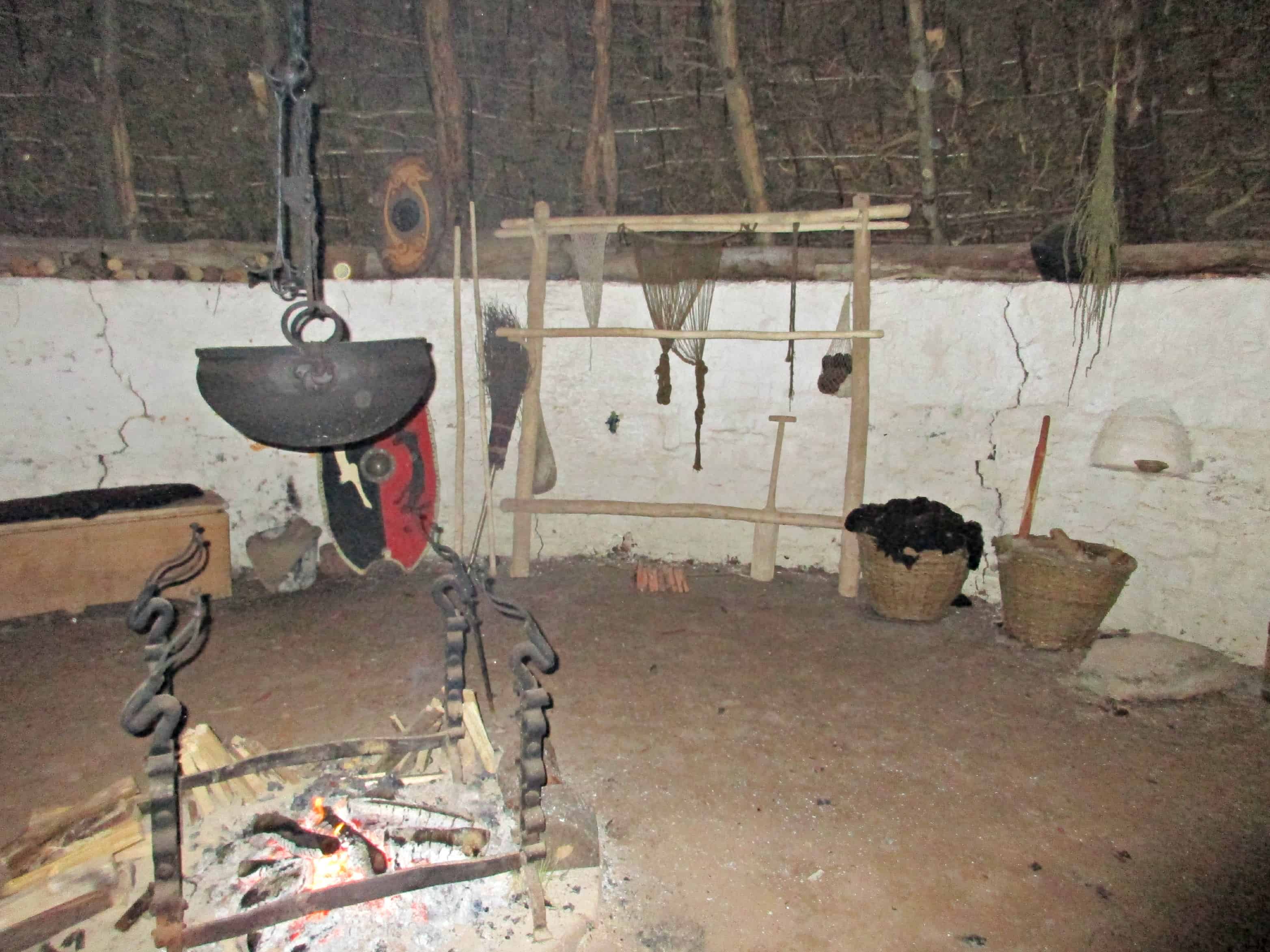 The final part of our visit was looking around the Manor House itself. The whole of the museum is free entry, including the Manor which we thought was amazing, considering what a wonderful place it is and how much there is to see. You can easily spend the whole day here, we must have spent 4 hours +, and that was in the rain and with the inside exhibitions closed. It really is a fascinating day out, and we will definitely be visiting again. 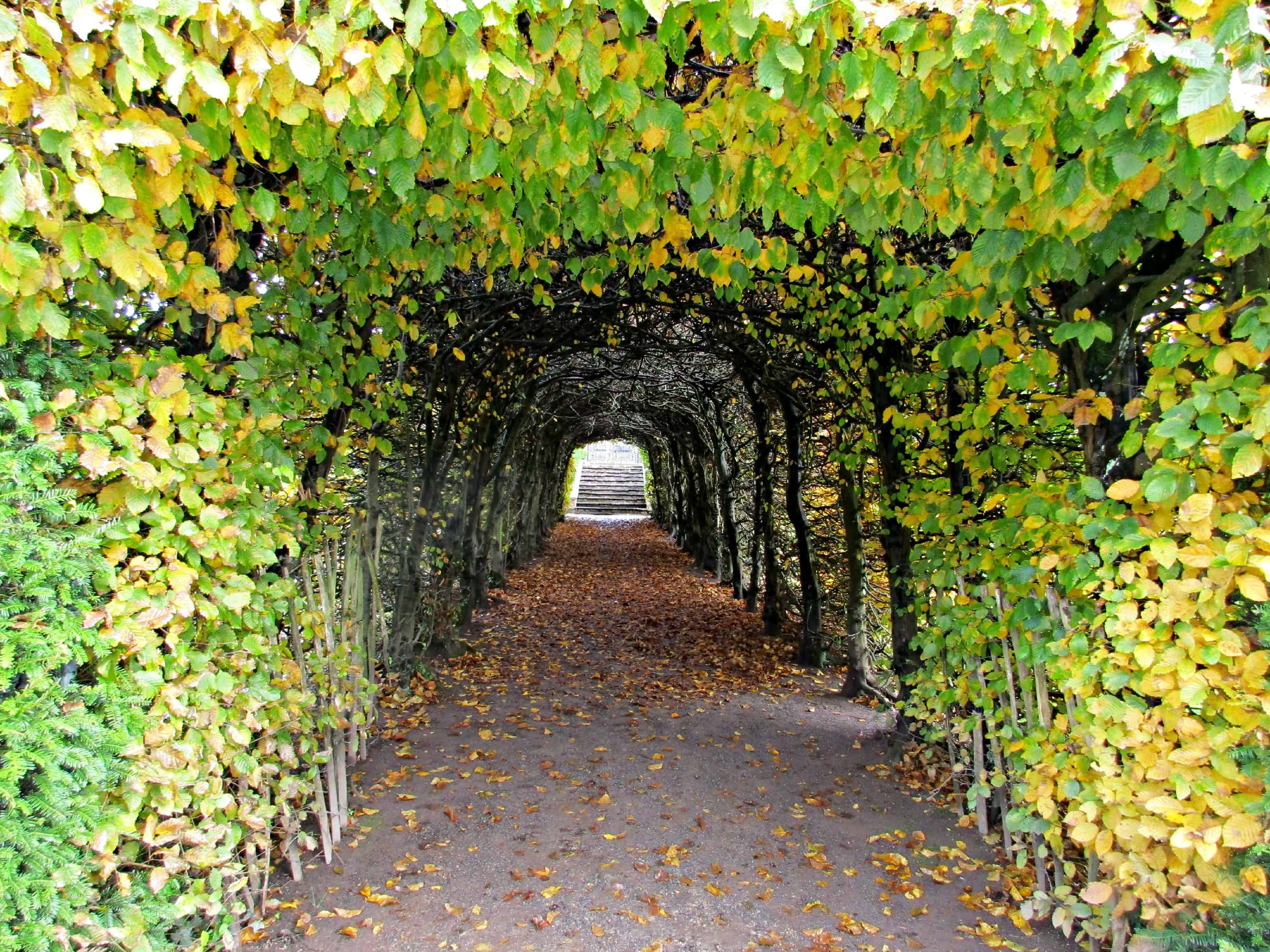 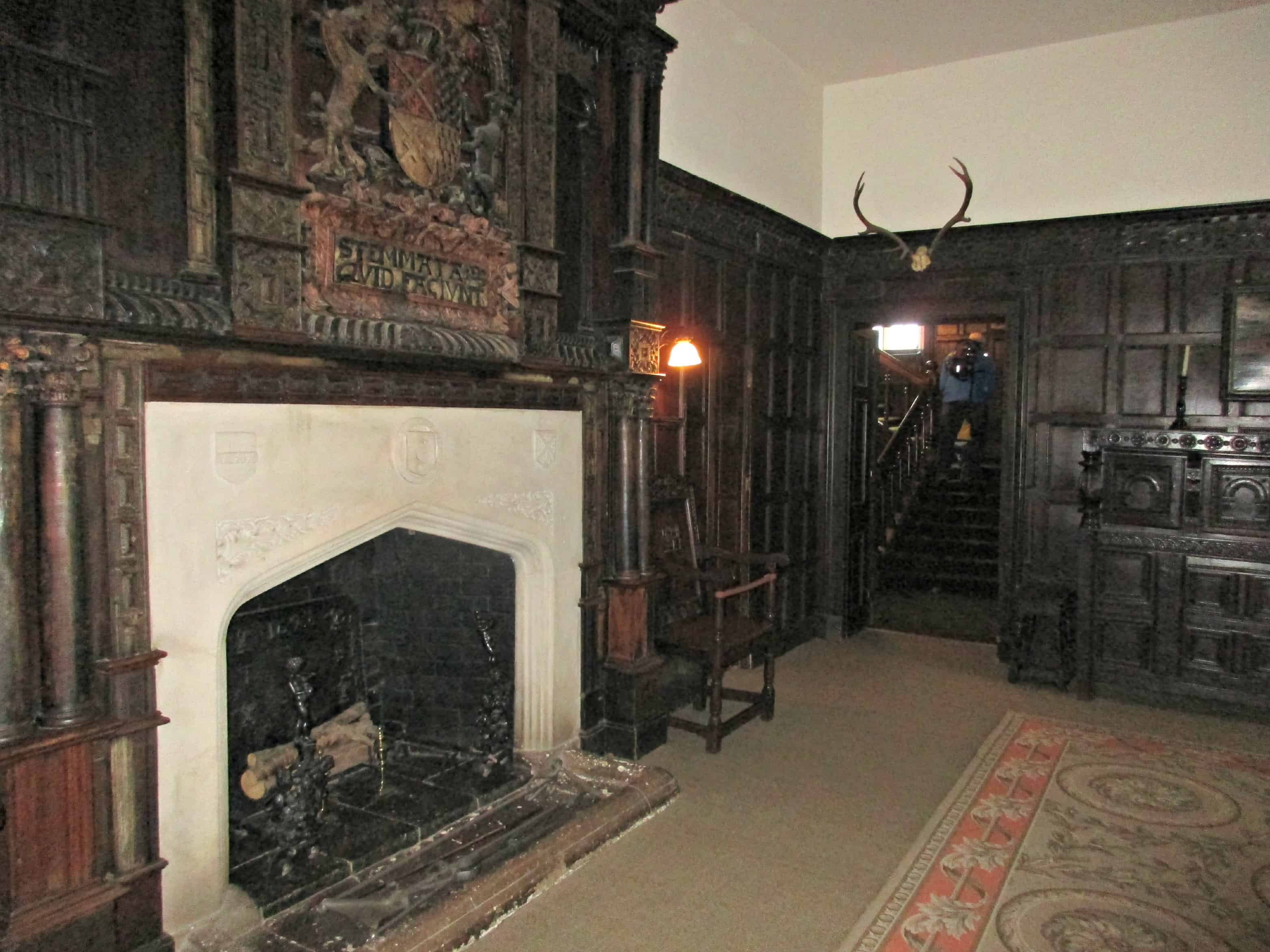 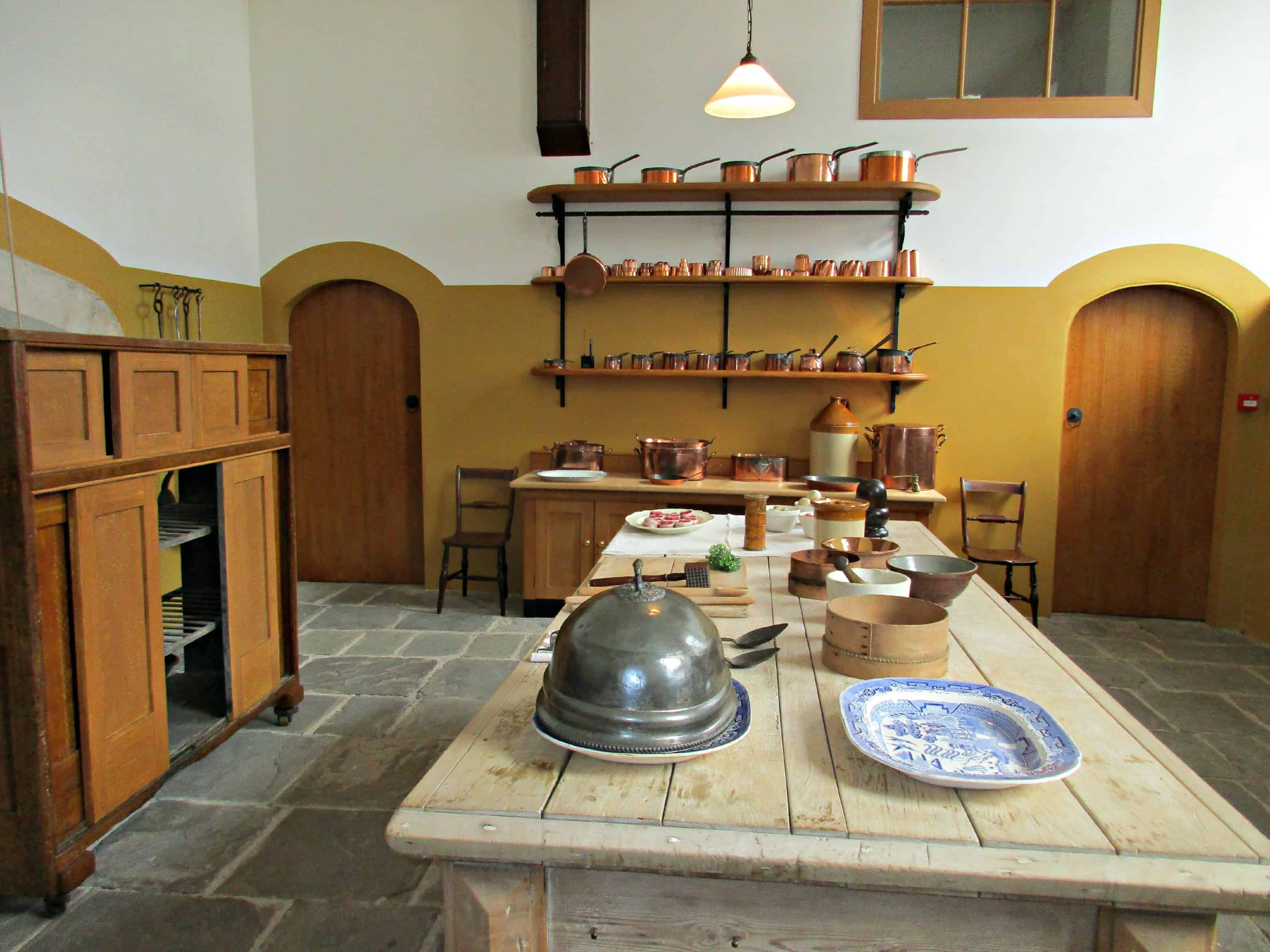 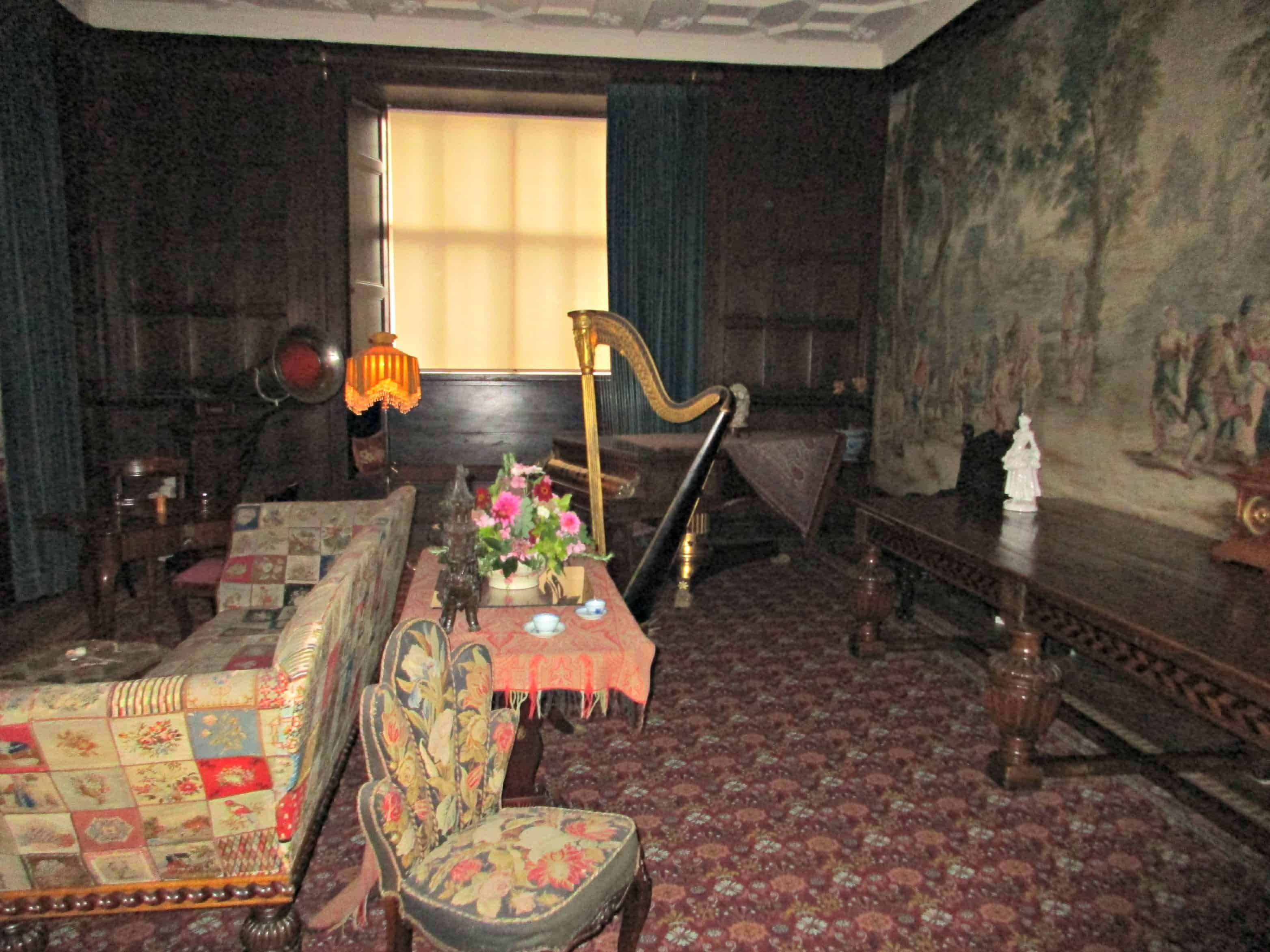 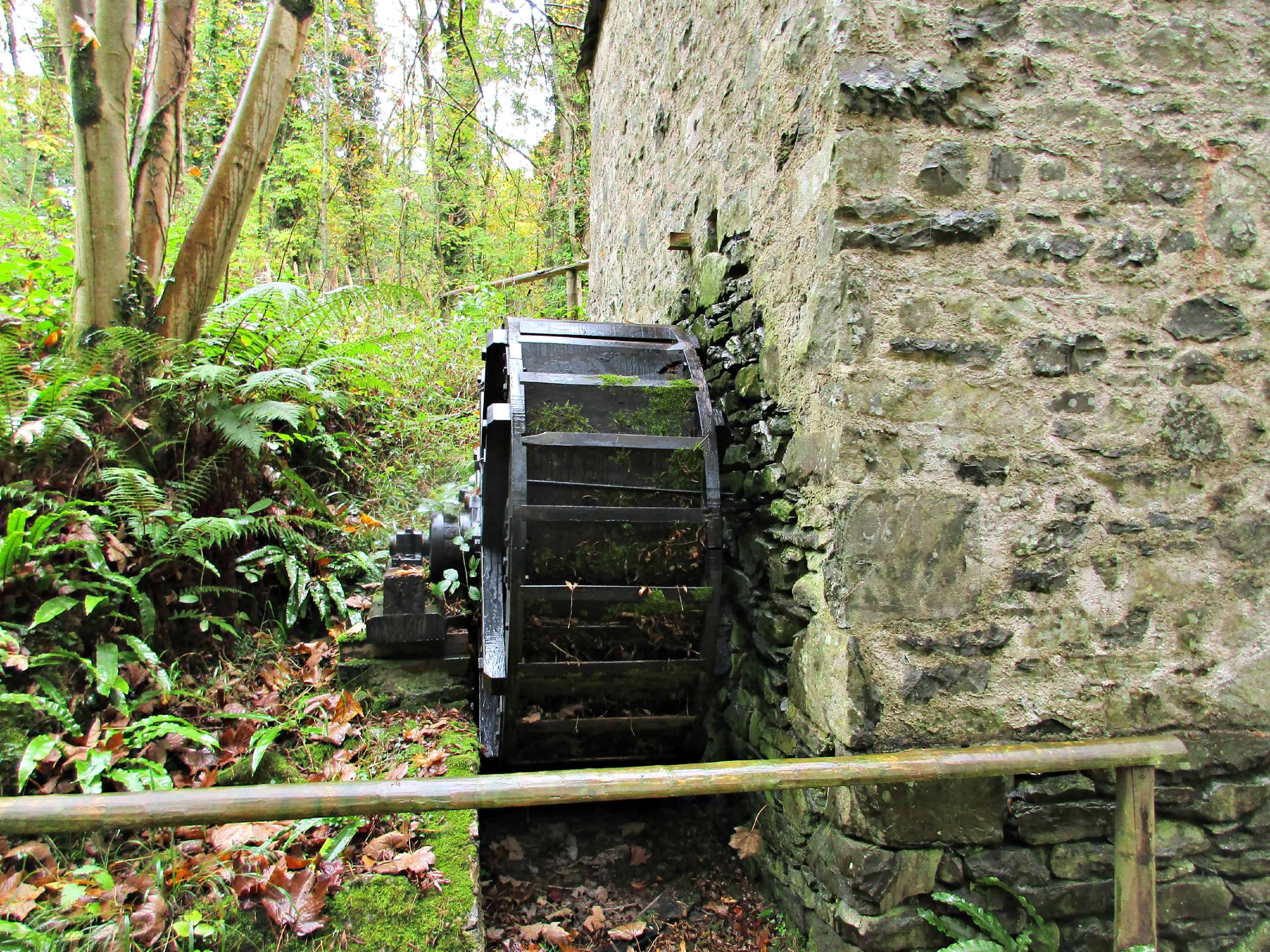 How to Make Homemade Firelighters from Recycled Materials

How To Make An Easy Modroc Christmas Bowl

A Family Holiday at Bluestone Wales

Learning bushcraft skills as a family

Family Day Out at Bath Racecourse

12 Fabulous Places to visit in and around...

Our visit to the Elemental Sculpture Park

I absolutely love the sound of this place. I didn’t realise museums existed like this. It sounds fascinating. I’m addicted to house programmes and history haha so this would be right up my street! I’d love to see all the different style houses and learn about the people that used to live in them. I can’t believe you said it’s free either. That’s mad! I’d pay at least £10 to come and see all of this. We’re planning a trip to Wales next year, I’m looking up this postcode. Thank you so much for linking to #whatevertheweather. x

Think a lot of the museums are free in Wales. There’s another one called Big Pit near there which was a coal mine – apparently you can go down the mine shaft and have a tour from a miner who worked there – which would be incredibly interesting too 🙂

Love that your children declined a dressed up photo, mine decline now and I imagine they will decline in a few years time as well! St Fagans looks like an amazing place to learn more about history, the iron age houses are fantastic, I’ve always been interested in iron age and the history before that, considered being an archaeologist once but went into ecology instead.
Thanks so much for linking up to #Whatevertheweather 🙂 x

Being an Archaeologist would be fascinating wouldn’t it? I love both History and Science, and I think the two interests go together so well. My kids definitely know their own minds, and in fact seem fairly confident that they pretty much know everything 🙂

I love St Fagans, we used to go twice a year with my parents well into my teens. It was even where I met my other half (we were on a uni trip)! I can’t wait until Marianna is old enough to go – there is no way she is getting out of the vintage photo though. 😉

What a lovely place to meet – There was a wedding taking place there when we visited! Would have loved to have got the vintage photo of the kids, but they weren’t having any of it 🙂

What a great place to learn from and explore the past, so much to see.
Thanks for linking #LetKidsBeKids

It was a really fascinating place, and in a beautiful setting. Thanks for having us on #LetkidsbeKids

Oh my days. This is my idea of heaven. This place is now on my must visit list!

I find this type of open air museum fascinating. It looks like there’s an awful lot to see and its great that it isn’t all from just one period of time. Definitely something to add to my list of things to do next time we are in Wales #busydoinglife

It’s traveling back in time – it really is an amazing place, we’ll definitely be going back soon. Also love the fact that the free entry makes it accessible to everyone 🙂

I love places like this, the history of how it came about is fascinating not to mention the houses themselves. My eldest is hoping to be in Cardiff Uni from next year, I will book mark this one for a family visit to see him. Thank you for sharing with me on Country Kids

My friend’s daughter is at Cardiff Uni and absolutely loves it – so much to do there! It’s a great day out, really brings Welsh history to life 🙂

What a fantastic place to learn about history. I love places like this. It reminds me a little of Beamish in the north-east. I have pinned to my Wales board. Great find!

The place has such a wonderful feel to it, we really loved it. Thanks for pinning!