How To Make Sourdough Starter From Wild, Natural Yeast

Natural yeasts, also known as wild yeasts are a group of fungus that can be found all around us. On our skin, in the air we breathe and throughout our natural environment. They have been utilised by Man in brewing and baking since prehistoric times. So before the advent of commercial baker’s yeast, it was these natural yeasts that would have been used to produce all Levain bread.

And if you are wondering what the difference between Levain and Sourdough bread is, the answer is not much. Levain is the French word for leavened and is also a term used for the flour, water and yeast mixture that makes up the starter. The name Sourdough arose as a descriptive term used to describe the taste of bread made by this same method.

So what is a Sourdough Starter?

Sourdough starter is a stable culture of lactic acid bacteria and natural yeast in a mixture of flour and water. The bacteria and yeast are symbiotic, meaning that they have an interdependent relationship. The lactic acid bacteria metabolise sugars that the wild yeasts cannot, while the yeast metabolises the by-products of lactic acid fermentation. The combination of the two working together is also what stops other, less friendly organisms colonising the starter and causing it to spoil.

How does this symbiotic relationship make Sourdough Bread?

The natural yeasts produce carbon dioxide gas which leavens the dough, causing it to rise. While the bacteria produce lactic acid, which contributes flavour in the form of sourness, giving rise to its name.

How to collect wild, natural yeast for your starter.

Traditionally Levain bread starters were placed in orchards for the collection of natural yeasts. I chose to put ours among Blackthorn blossom to collect mine. Blackthorn is one of the earliest flowering fruit bushes here in the UK. Its fruit is the Sloe which we use to make our Sloe Gin Recipe in the autumn. When we pick the Sloes they are always covered in a layer of yeast, so it seems a logical bush to target, but I think placing the starter among any flowers or shrubs will probably work just as well. 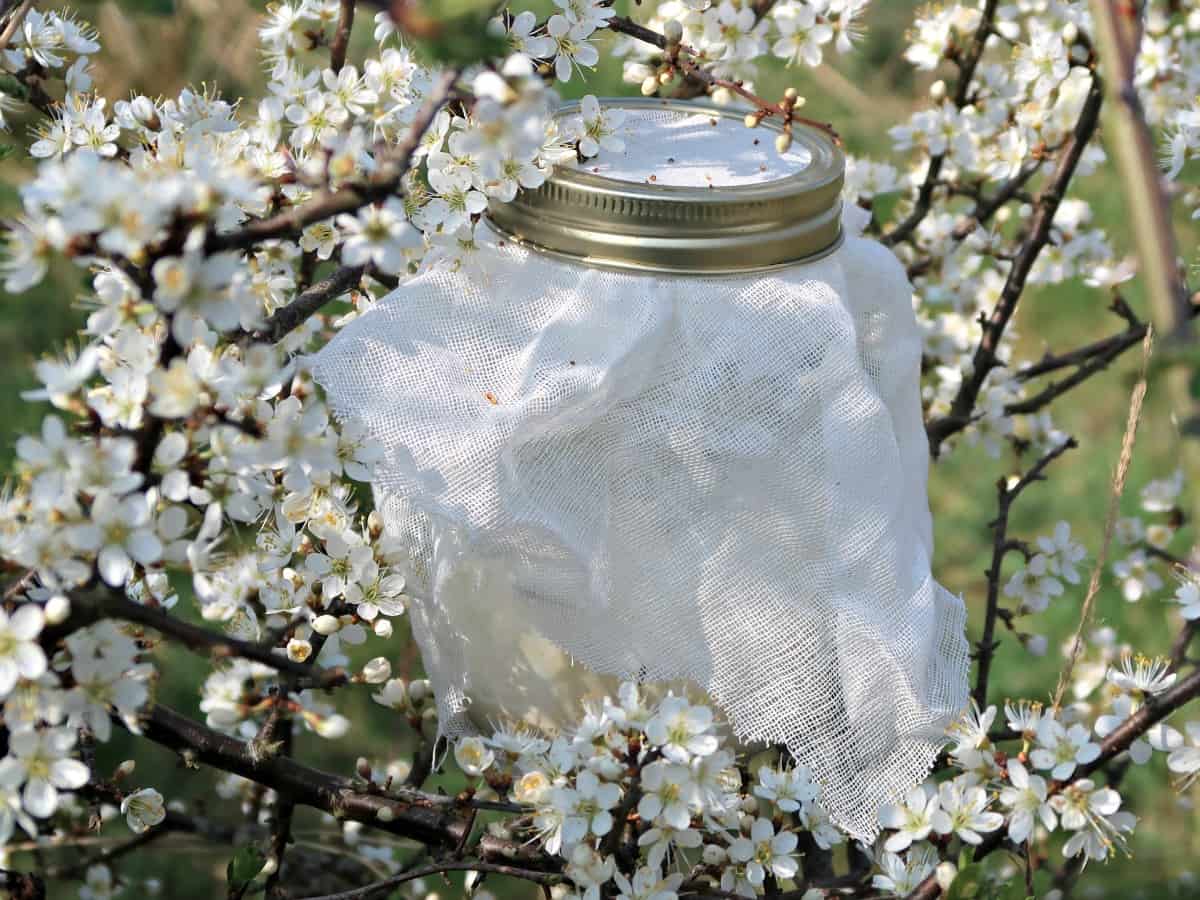 Mix 100g of flour (I used white) with 100g (weight) of mineral water in a Mason Jar. Tap water often contains Chlorine and other chemicals which could kill the yeast.

Cover the jar with a piece of muslin and secure it with the ring part of the lid. If you don’t have a Mason jar with a two-part lid secure the material with an elastic band instead.

Place the jar containing the starter among some blossom in the morning on a warm, still day and retrieve in the evening. Remove the muslin and replace with a loose lid so that any gases produced by the yeast can escape and leave it on the side in the kitchen.

The next morning  start the regime that you will follow for the next 7 days. Tip half of your starter away, then add 100g flour and 100g water, give it a good mix and loosely replace the lid of the jar, before setting it back on the counter.

After 3 or 4 days you should start to see bubbles appearing on the surface of your Sourdough starter. Before feeding it will smell yeasty and a little acidic. These are all signs that the natural yeasts and bacteria are multiplying and working together.

On day 7, the starter should be quite bubbly and smell much sweeter. It is now ready to be used in baking or can be stored in the fridge indefinitely with a weekly feeding to keep the starter alive.

And here is our very first Sourdough loaf made with our own wild yeast starter. It tasted delicious, and we think it looks pretty good. There lots of Sourdough bread recipes on the internet. We like Emilie’s Everyday Sourdough as it has clear, easy to follow instructions.

Sarah is the founder and author of Craft Invaders. She blogs about her original craft tutorials, recipes, foraging, the Cotswolds, and developing well-being through being creative, spending time outdoors and connecting with nature. She is also proud to be an Ordnance Survey #GetOutside Champion.

How to Make Hazelnut Liqueur Easily at Home

Raspberry Gin: How To Make The Best Pink...

What do you use to “feed” the starter with?

This is so exciting! I had no idea it would be so easy to get your own wild yeast cultivating.

Tell me, do you think the yeast from different types of plants/shrubs imparts a different flavor to the sourdough? Or does all the yeast taste the same in the end?

Nature is so amazing isn’t it 🙂 I like to think wild yeasts will taste different depending where they are collected from, but am not experienced enough with them yet to know. The bread definitely tastes different from commercial sourdough though, It had a milder, less sour taste which is perfect for us as my hubby isn’t keen on sourdough generally, but loves this. We have also noticed that when we make bread from this starter we all stay full all day (in a good way) so it definitely feels as though it is more nutritious and digestible to us than regular bread.